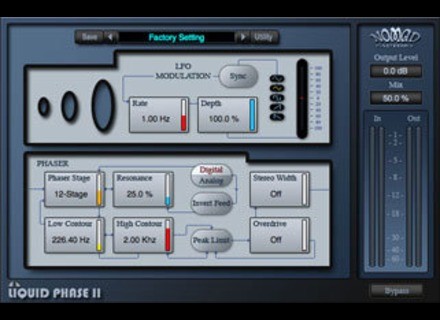 The Nomad Factory Liquid Phase II plug-in is one that comes as part of Nomad's Liquid bundle and is not sold individually. The good news is that the entire bundle is about as cheap as many single plug-ins. I don't own this bundle, and have just used it at the studio where I'm working since they have it installed on a few different systems here. The bundle is compatible with both Mac and PC operating systems, as well as in every major plug-in format, so compatibility shouldn't be much of an issue here. Using the Liquid Phase II plug-in isn't hard at all, although there is a good amount to work with so it does take a small amount of getting used to, as would be the case with any plug-in. For the phaser there are parameters for stage, resonance, low and high contour, overdrive, and stereo width. It also has an LFO modulation section consisting of parameters for rate, depth, and waveform sync. Lastly, you can set your mix and overall output level inside the plug-in as well. I haven't seen a manual for Nomad's Liquid Phase II...

We've got the Nomad Factory Liquid Phase II plug-in and the full bundle running on all of our systems at the studio where I work. The main room is Pro Tools HD (like the rest of them), and has a Mac Pro desktop computer with 10 GB of RAM and dual 2.66 Ghz Intel Xeon processors. The fact that it's a Pro Tools HD system is enough to run it, but of course the super powerful computer helps as well. I'm not sure how well this might run in Pro Tools LE or 9, but I'd imagine that it would be pretty stable on most systems.

The Nomad Factory Liquid Phase II plug-in is pretty average, but will certainly give you the phasing effect. It's not the warmest or most 'analog' sounding plug-in out there, but for simple phasing effects and beyond, it's certainly adequate. The Liquid II bundle as a whole has similar plug-ins for different effects and signal processing, all for a very cheap price, so it's definitely a bundle that is best suited for home studio owners. Professionals most likely already have plug-ins that are better than these, but if you're looking to further expand with more options at a cheap price, the Liquid II bundle will do the trick. So while the Liquid Phase II plug-in isn't anything revolutionary, there's a good amount of sounds that are possible with it and more times than not it will get the job done for in the box mixing...
Did you find this review helpful?yesno
Cookies help us improve performance, enhance user experience and deliver our services. By using our services, you agree to our use of cookies. Find out more.