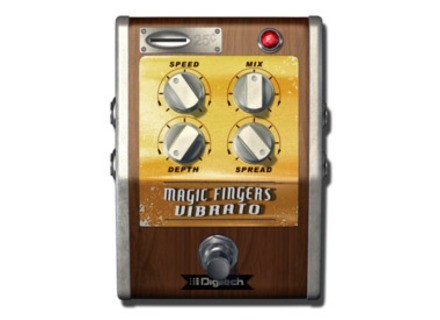 The SPREAD control changes the modulation from being  synchronized in both of the pedal’s outputs to moving from left to right in the sound field, to create stereo spatial effects. The  e-pedal’s MIX control enables the player to mix the dry signal back in with the effected signal. SPEED and DEPTH controls let guitarists tailor the speed of the effect "from a slow sweep to a  frantic warble and from subtle pitch variation to an up-and-down sonic roller coaster."
The Magic Fingers’ Tap Tempo feature lets players synchronize the speed  of the vibrato or the panning with the beat of the music. Tap Tempo is  enabled by holding down the footswitch until the indicator LED begins to  flash. While Tap Tempo is active the player can use the SPEED knob to adjust the ratio of the tap interval to create  faster speeds.
Pricing & Availability:
The DigiTech Magic Fingers e-pedal is now available at an introductory price of $0.99. This introductory price will run through November 12, 2012. After the introductory period the price will change to $7.99.
The DigiTech iStomp is currently available at $229.95 suggested retail.

Head to www.harman.com for more details.