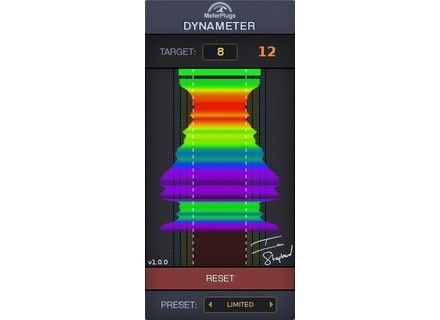 Value For Money : Excellent Audience: Anyone
Buy this productView price information >
While mastering music is a huge skill which requires a skill set beyond “simple” mixing, many of us try to master our own music. And many succeed.

Also, for many, a track which sounds as loud as the loudest track on radio is the Holy Grail.

Others believe that dynamics, where the listener can hear the difference between loud passages and soft ones, should be the priority.

My tests involved mastering tracks for my next album, and it operated without a hitch. The interface is almost self explanatory and easy to use, though a quick view of some video tutorials made by Ian Shepherd might aid the users' understanding of the way it works and what it doesn't do.

We all know about the loudness wars, where everyone competed to get the waveform of their music to look like a perfect rectangle with no peaks or troughs.

But that notion is rapidly losing traction, and in many ways, that is due to two things: loudness legislation, where radio and TV must meet certain perceived loudness levels, and normalisation operated by streaming and broadcast platforms.

The change has led dynamics champion Ian Shepherd to offer up a way of meeting the new criteria AND ensuring that your final mix sounds just as loud as it's neighbour on most platforms.

Meet Meterplugs Dynameter. It is NOT a replacement for the TT Meter which has been the mainstay of checking the dynamics of mixes are for many years. It is an alternative.

The PSR is a constantly updated short term measurement showing how loud your mix gets.

The meter shows these in a simple clear format, with the largest window dedicated to a scrolling display showing how dynamic your mix is as it runs. Colour coding (green for VERY dynamic to horrendous brown-orange and red for squashed to death).

These things, of themselves are very useful. But I have to say that there are many meters that offer almost exactly the same information (though not with the scrolling dynamic display).

The meter also carries information about the levels which platforms ranging from Spotify and Itunes to Broadcast media normalise music to. And it is there that it comes into its own.

The first message to anyone who turns out brick like masters crushed to within an inch of their life and peaking at exactly 0.0db is that, if the result is louder than the normalisation used by a platform, their mix WILL be turned down by the platform and may well sound QUIETER than rival products.

That will not be enough to stop many producing such mixes, but for me, it's the thing I've needed.

This meter shows me when my mixes are fairly dynamic and allows me to judge that they will play sound as loud as most other tracks on a given platform. THAT is gold-dust.

Ian Shepherd is VERY quick to add two qualifications about the meter. It is NOT, he says, a definitive guide to the dynamic nature of your mix. But it is a good guide.

With that said, I tried to meter on a number of mixes for my next album. I was first horrified (by what I had already done) and then delighted when I used the meter to amend my mastered tracks to fall within platform targets.

It was a difficult journey. It required a leap of faith.

I had thought my mixes were very dynamic and not too loud. No bricks here, lots of good peaks and troughs in the wav and no clipping.

But what I found (and I realise this may have little to do with Dynameter per se) was that my remasters sounded alive. The dobro on one track sings now. Before it just played. The fiddle on another takes on the mournful tone I intended.

That may all be to do with my perceptions, or even the psychological effect of saying to myself that I am making more dynamic mixes.

I used the plug-in in the mastering phase of my work: that is when I render my entire mix to a single wav file from which I create my end product.

For clarity, I use a mastering chain which goes Gain, EQ cuts, Stereo width (I seldom use that), Compression, EQ boosts, Gain and limiter.

To get my masters to meet the dynamic requirements of various platforms, I tweaked those plug ins . Often it meant reducing the compression.

Here's what I found in doing those remasters: I found it an easier way to work than trying to balance sonic integrity, some dynamics and hitting the loudest wall you can without doing your mix damage.

I found myself remixing a couple of tracks because, when I created a dynamic master, I disliked how the mix sounded. That dobro (which I wanted to cut through the mix as a fill between vocals); I CUT the level on it in the mix and then mastered again. It sounds better. I'd had to raise it's level on my “loudness mixes” to get it to cut through.

The same applied to the “mournful” fiddle I mentioned. I remixed and CUT it's level and when I remastered and it is the instrumental hero of the mix.

I was surprised at how much easier it was to meet the meter targets by tweaking the plug ins, more intuitive.

So all in all, I am delighted with it, and it shows what expertise Ian Shepherd brings to mastering and how well Ian Kerr (of Meterplugs) does to create the plug ins.

But I do have criticisms. One minor, the other more serious.

I'd like the bar showing the correlation with platform PLR levels to be more prominent.

Also, some sound/loudness meters (Orban for example) now allow you to run a complete file through them in a few seconds to get the LUFs level.

A similar facility to get the PLR level would be good. It does eat up the time if you have to play your entire song through to check the PLR, find that it's not what you want/need and you have to go back and makes changes and then do the same again.

So is this a game changer like Meterplugs' Perception? No. but it is a VERY valuable tool to have in the armoury.