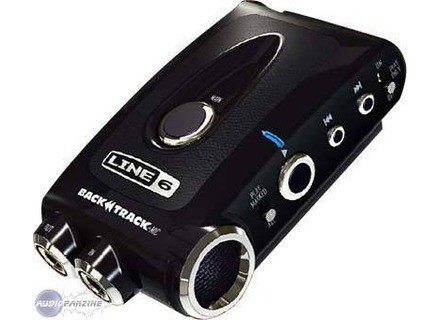 
4 user reviews
Find it in the classifieds starting at $65 Avg used price: $45

Unfortunately, we often realize too late that we should have recorded what we just played. How many times have you wished that you could go back in time and hit the record button right before inspiration hit you? Line6 has come up with something along these lines with its portable recorder, the Backtrack, a small device that lets you save a take after the fact. Is it magic?

Unfortunately, we often realize too late that we should have recorded what we just played. How many times have you wished that you could go back in time and hit the record button right before inspiration hit you? Line6 has come up with something along these lines with its portable recorder, the Backtrack, a small device that lets you save a take after the fact. Is it magic?

No, there's nothing magical hidden in this little box the size of a pack of cigarettes, and the process is simple: Backtrack continuously records after being activated and automatically splits out audio events thanks to its silence detection. Just press the big Mark button in the center of the device when you want to keep something you just played. It’s both simple and original! But let’s take a closer look at the device.

The Backtrack is small enough to fit in the palm of your hand and is therefore easily transportable. It has a belt clip on the back, a ¼-inch guitar input as well as a ¼-inch output so you connect it to an amp. There are two versions: the Backtrack, which is designed to record instruments via a jack, and the Backtrack + Mic with the same features, but which also has an integrated microphone which allows you to record any acoustic instrument. We’ll be testing the latter.

The first thing that should be mentioned is that the device is USB powered. This connection lets you get to the audio you recorded with the Backtrack as well as recharge the internal battery. The manufacturer claims an autonomy of more than 8 hours and its memory (2GB) allows the user to record 4 hours of audio in 24 bit/48 kHz or 24 hours in 16-bit/11 kHz. There are also intermediary settings (22, 32 and 44.1 kHz) for greater flexibility. Note that the Backtrack only supports WAV format. It seems that Line6 didn’t deem it necessary to use less space-consuming formats such as MP3 or AAC. Of course WAV offers better sound quality, but is this the real point of a device like this? A compressed format would have easily fit 10 times more audio in its memory without sacrificing sound quality, which, for a tool of this kind, is not the priority. Moreover, it’s too bad they didn’t integrate a built-in speaker; if you record via the mic you’ll need to listen back to your takes with headphones (not included). If on the other hand, you’ve got the output connected to your amp, you can listen back to your takes through the amp.

As for controls, the most important one is the big "Mark" button which will be used frequently to mark and set aside a recording you just made, as well as any previous recordings. However, it’s impossible to un-mark a file as well as erase it directly from the Backtrack, which is a pity. On one side of the device there’s a headphone jack and two volume buttons (+ and -) and on the other side there are three buttons and two switches. The three buttons are the classic "Play", "Fast Forward" and "Rewind" buttons, which will allow you to move to the previous/next recording. The first of the two switches lets you, in read mode, listen to recordings that were previously marked, or all the recordings (marked or not) in Backtrack’s memory. The other position lets you mark takes that weren’t necessarily marked after their recording: "Actually, that riff wasn’t so bad after all." The second switch is to turn the Backtrack on, the LED turns white at startup then turns blue when the recorder is ready. Unfortunately Backtrack takes a good ten seconds to become operational (this time varies depending on the number of files in the internal memory) which is too long for a recorder like this. Hopefully a future firmware update will deal with this issue. Note that there’s a "Play Only" position available on this switch, which will give you the opportunity to listen to your recordings without recording anything. It’s also possible to loop a passage to make it easier to work on.

It’s worth noting that in order to use Backtrack + Mic’s integrated microphone, you must unplug your guitar. So, it’s impossible to record using both mic and jack.

Note that for those who don’t like the idea of an automatic recording device, there’s a simple way to manually start recording by pressing the Play and Mark buttons, then the LED will become red.

Automatic mode has a few settings that can be used to optimize how the device operates. In fact, depending on the situation, it’s possible to modify input gain, etc. For this you’ll need to install the Mac/PC software available in Backtrack’s memory once it’s connected via USB. Don’t look for an installation CD, there isn’t one! Once the software is installed, you can change some parameters: the sample rate, resolution (16 or 24 bits), and also the date and time, plus it will also be possible to update firmware and adjust the automatic standby mode. Note that while it’s necessary to install the software in order to change these parameters, it is still possible to recover files from the Backtrack without installing anything on your computer, like a simple USB key. When connecting the recorder to the computer, there are two folders: "Backtrack MARKED" for marked files and an "unmarked" folder for those that aren’t. Another folder called "USER" will be used to import additional files. It has to be WAV format if you want to play them through the BackTrack. An important note: BackTrack will store marked files and erase unmarked files when internal memory starts to get tight.

As for the instrument input and the integrated microphone, the software offers several presets adjusting gain entry that are suitable for most situations: "passive" guitar, "active" or "POD out" for the input Jack, and "Low", "Medium" or "High" for the microphone, depending on if the recording is to be triggered by a low, medium or high signal level. The first preset is suitable for acoustic guitars, the second for amplified electric guitar and the last one for whole groups. An automatic gain is also available, but the most interesting bit is yet to come: it’s possible to define the minimum duration of a recording (if a short unintended noise occurs, it won’t keep it), and also the length of silence before splitting events. The Backtrack remains highly customizable and at worst, its manual mode will convince even the most skeptical amongst us.

Of course, you won’t be able to create a "Dark Side Of The Moon" with Backtrack. It’s definitely not meant for professional recordings. The primary function of this small digital recorder is to serve as an audio capturing device and to help musicians capture moments of inspiration. So one shouldn’t be too demanding about sound quality. The latter is largely adequate in view of the price of the device. Field recording enthusiasts wishing to record with greater fidelity should turn to the big names (Nagra and company ...). To give an example of Backtrack’s sound quality I recorded my acoustic guitar.


Line 6 offers a highly original product that differentiates itself from the competition through its well thought out ergonomics, though they may be confusing at first. Its size and weight will be appreciated by musicians on the go, and its audio quality, without being extraordinary, is adequate for use as a type of audio capture device. Its few flaws remain bearable: only uses WAV format and its start time is a little long.