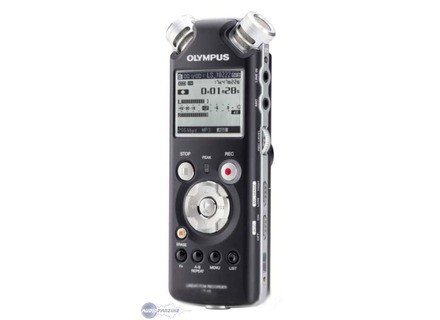 When Olympus, famous for their clout in the photography world, takes on the audio market, we get the LS-10, a portable digital recorder determined to stake its claim in new territory ...

When Olympus, famous for their clout in the photography world, takes on the audio market, we get the LS-10, a portable digital recorder determined to stake its claim in new territory ...


Many manufacturers specialized in audio have recently released portable digital recorders, among them renowned experts like Marantz or Nagra, but also more accessible brands like M-Audio, Edirol and Zoom. There’s something for everyone and especially for all budgets. Olympus has therefore ventured into a field already populated by brands well known to audio lovers. Despite this, Olympus hopes to take advantage of its photography experience and expertise in order to find its niche in the audio world.

At first glance, the LS-10 has very interesting specs, judge for yourself - two electret microphones, a large backlit display, 2GB built-in flash memory, an SD SDHC card reader, encoding on the fly in MP3 or WMA , recording in 96 kHz wav ... Add to that a nice but serious look, and construction that breathes quality, and you get a very attractive recorder ... Right off the bat you’ll get the feeling of solidity and robustness: Olympus’s know-how seems undeniable here. This is clearly a notch above what some brands like Edirol or Zoom have to offer: you won’t be afraid to take the LS-10 along with you wherever you go. It’s weight, slightly more than some of its competitors, (165 grams including batteries) probably contributes to this feeling of ruggedness.

But let’s see if the little guy delivers the goods…


The LS-10 lets you record in three different formats: linear PCM (WAV files without loss of audio information, but relatively space consuming), MP3 (compressed format) and WMA (also a compressed format made by Microsoft). The first format allows a sampling rate of 96 kHz 24-bit, which would be suitable for ‘def’ recordings but would be totally overkill as a ‘notepad’. Mp3 format (128 Kbps to 320 Kbps) will save a lot of space, and WMA (from 64 Kbps to 160 Kbps) will be even lighter. With an integrated memory of 2 GB, the LS-01 will let you save up to 3h10mins in WAV 44.1 kHz/16 bits 17h45mins in Mp3s 256 kb/s or 69h35mins WMA 64 kb/s! That’s quite a bit of recording time, especially if you add a SD HC card (up to 8 GB) which will multiply the above times by 5!

As for autonomy, the LS-10 claims 16h recording 44.1 kHz WAV/16bits and 35h playback. Knowing that the device takes 2 AA batteries, it will be easy to take along a couple of spare batteries in your pocket ... This small recorder, therefore, lets you make long recordings without having to empty the memory onto the computer or change the batteries, a good point!

In terms of inputs and outputs, there’s a mini headphone jack, a mini-jack mic input (with ‘plug-in power’ and an impedance of 2 Ohms) and a mini line input jack. It would have been nice to have one or two XLR inputs (like on the Zoom H4) to broaden the scope of the LS-10, but only MiniDisc type microphones can be used, unfortunately. Here are some examples of compatible microphones: ME30W, ME51S, ME-15, ME-52W, ME-12.


Once the LS-10 is turned on (only 2 to 3 seconds are needed for it to become operational) via the switch also serving as a 'hold' feature, you’ll quickly find your bearings, the basic functions being under one’s thumb: a play/ok button, next/previous buttons, up and down buttons, a stop button, an erase button (delete a file or folder) and a record button. Pressing the latter arms but does not trigger the recording, you’ll be able to adjust the level via the wheel on the right side of the device. Pressing this button a second time will then start the recording. It doesn’t get anymore complicated than that. You can immediately listen back using the built-in speakers or headphones and pressing play. It’s even possible to listen while you’re recording, but only by using headphones (and for good reason, the use of built-in speakers would cause feedback).

If the sound source is too strong, it’s possible to reduce the sensitivity of the integrated microphones via a switch located on the right side of the device. In addition, the LS-10 offers the possibility of activating a low-cut filter while recording. Be aware, however, that the integrated microphones don’t go under 70 Hz (according to the manufacturer), making this feature somewhat superfluous ...

Beneath the command dial are four buttons: 'list' displays the file browser, you can then browse through directories using the up/down and left/right arrows of the device. It’s all very intuitive for regular users of digital music players. The ‘menu’ button lets you access the LS-10’s parameters: activate the reverb, select the sampling rate, the file format, and so on. The functions of the recorder remains simple and easily understandable, no worries at this level. The 'A-B repeat' button lets you loop a passage or an entire recording, a very convenient feature for musicians wanting to practice or work on segments. Finally, a last button called 'fn (Function)' is adjustable and may be used, for example, to trigger the reverb or another of the LS-10’s functions: practical!

What about the ergonomics of the device in use? That ’s what we’ll be taking a look at next...


The big backlit screen has the advantage of being able to display a lot of information, which can be intimidating at first, but which proves to be quite convenient. You’ll appreciate the large meters, quick startup, and convenient buttons all within easy reach. One drawback however is the inability to rename created files: a 'LS100003.WAV' file is much less informative than a 'killer_riff.wav'. However, hopefully there will be a firmware update to correct this small issue. As for folders, it’s also impossible to rename, delete or add any of them: there are 5 of them, end of story. The tree directory is frozen and that’s a shame ... There’s a folder called 'music' for storing and organizing MP3 files to your liking, the LS-10 can therefore be transformed into a digital music player. The ergonomics remain inferior to an iPod and other digital music players; tags and playlists are not managed. To round out this ‘bad points’ segment, we’ll mention the two volume knobs for listening and recording which prove to be a bit awkward to use and sometimes difficult to adjust for larger fingers. It’s also a shame that you need to screw the device onto a camera stand and not a mic stand, which is, after all, more popular with musicians ... The manufacturer’s photography past comes to the fore!

Despite these minor issues, the LS-10 is still effective and enjoyable to use. It does what you tell it to do, and quickly. It’s the ultimate weapon for nomad composers, always anxious to record a melody that drops in on them unexpectedly.

Connection to a computer is achieved without mishap through the mini USB connector: the LS-10 is recognized immediately and without drivers. Olympus has also had the great idea of including Cubase LE 4, compatible with both Mac and PC, which lets you edit your recordings. It is a very good point given the quality and price of the software.


The global quality of the two integrated microphones is good, their limitations in the low frequency range are mainly due to the size of their capsules and directionality. But of course manufacturers can’t do otherwise with devices this size. So it’s best to avoid using this device for recording instruments having frequency ranges below 70/80 Hz. For voice and acoustic guitar, the LS-10 lived up to my expectations. You should however put it on a stand for any serious recording in order to avoid noise while handling the device. The 90° positioning of the two microphones gets a good stereo image, and it’s possible, via the 'zoom mic' function to narrow the directionality of the two microphones and focus on a specific element. One should avoid using the default recording level in order to avoid a highly compressed sound. However, the integrated limiter can save the day by cutting out any unwanted peaks and therefore avoiding distortion or clipping..

The presence of both foam microphone covers is greatly appreciated especially when taking the device out on windy days as well as an integrated reverb available during playback. The latter proposes 4 algorithms (studio, club, hall, dome) that will give space and ambiance to your dry recordings. The 'Euphonix' function acts as a compressor and will, during playback, bring out sounds with low levels. Handy for helping fix a botched-up recording.

You therefore get a quality recorder, which, of course, will not replace your good old dynamic mic perched on the good old boom, but that will be useful in many situations and find its way into the pockets of many sound hunters! To give an idea of its sound, I recorded my acoustic guitar, the Paris metro (compressed directly into mp3 256 kps), a singer in the metro, the ambiance of a bistro (wav) and the street. There are also some examples offered by the Olympus: spoken voice, subway, a drink, harbour, organ, beach, zoo, fireplace and traffic.


Olympus has made a nice entry into the professional audio recorder arena. One will greatly appreciate its quality of construction, its overall sound quality, its autonomy, and generous integrated memory. Of course, in certain situations, the LS-10 will be showing it limitations, for example, recording an instrument with very low frequencies. But we forgive this quite easily in view of its compactness and its numerous strengths.