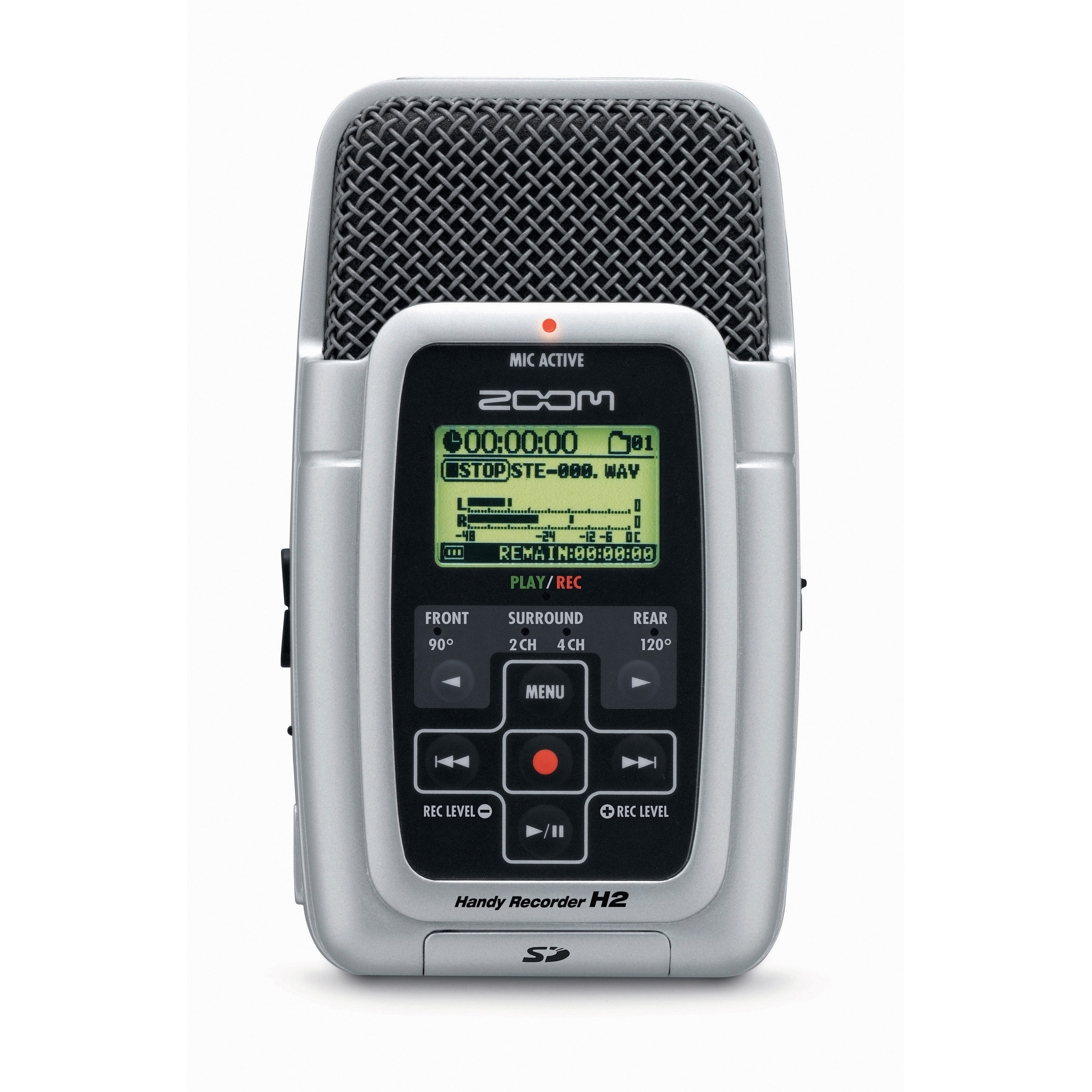 Pocket Recorder/Multitrack from Zoom belonging to the H2 series.

Product replaced by the Zoom H2n.

Out of all the digital recorders that have come out recently, the Zoom H2 is definitely one of the best sellers at the moment. It’s sold at a very affordable price (around 199 euros), but does the Zoom H2 live up to all of our modern day expectations?

Out of all the digital recorders that have come out recently, the Zoom H2 is definitely one of the best sellers at the moment. It’s sold at a very affordable price (around 199 euros), but does the Zoom H2 live up to all of our modern day expectations?

In this all-computer era, we would naturally wonder if buying a portable recorder is really necessary or useful. But our home studios are becoming so cluttered that transporting the computer means disconnecting a lot of stuff and bringing along the audio card/interface, mics, compressors, etc. …basically a lot of hassle. Plus, recordings made with these type of recorders are usually more for capturing or reminding than for definitive recordings. Only nature ambiance recordings, for example, could be usable in the studio later on. A recording device will never replace a professional studio.

Having said and accepted this, you have to admit that a portable recorder is quite practical. Plus, they often use WAV or MP3 formats (and not a proprietary format), which will make your recordings easier to use on your computer gear.

The least that can be said about the H2, after having opened the (nice looking) box, is that it’s well equipped. It not only comes with a handy tripod stand which attaches to the underside of the device, but also a mic clip adapter, (also attachable, letting you take device in hand or attach it to a mic stand), a 512 Mb SD memory stick, a cover, AC adapter, a windshield cover, stereo headphones, a RCA/mini jack cable to plug the H2 into hi-fi equipment, and a paper manual. As for the latter, the manual is 91 pages long and very complete and detailed with lots of recording tips, visuals and diagrams which really help show how it works.

The Zoom H2 is a smaller version of the H4, but it’s designed to be more affordable and easier to use, but less pro. It’s encased in what seems to be cheap plastic (which doesn’t bode well for it’s longevity), weighs 110 grams (4 ounces), and is quite small (63,5mm*110mm*32mm) which means it could fit in a big pocket. On the front panel, you’ve got all the navigation controls and menus: this is where all settings are adjusted. The screen, which allows 128x64 display, is LCD and backlit. As far as connections go, it should be noted that they're all in mini-jack format, which confirms the non-professional character of the device. There’s a stereo line input, an external mic input and a headphone/line output.

On one side of the H2, you can adjust 3 input level modes (low/medium/high) for the integrated mics, and on the other side you can adjust the output volume via the + and - buttons. The computer connection is USB 2.0 (mini-connector). This USB connection allows PC connection, and also Macs, without drivers (class-compliant).

On the back, the Zoom H2 lets us insert two standard alkaline AA batteries. The SD memory card is inserted into the bottom of the H2. Concerning this memory card: if you want to buy a bigger one, you should be aware that this device accepts cards of up to 2 GB in standard SD and 4 GB in SD HC (HC for high capacity). The fact that this device accepts latest generation HC cards is a plus: they can give much higher speeds than standard SD cards: up to 15,5 Mo/s write-speed.


The Zoom H2 is a digital recorder, with two stereo mics capable of recording up to 24bits /96 kHz wav. But it’s also an audio interface which is automatically recognized by your computer. Note that in this mode, the audio capacities are reduced to 16 bits/48kHz. Therefore, the Zoom H2 transforms itself into a USB Mic...

In recorder mode, the Zoom H2 can be configured to run in mono, stereo, and also in 4 channel mode through its two integrated stereo mics. The manual shows the different possible types of applications and how to position the H2 depending on the chosen mode. It’s important to note that in 4-channel mode, the sampling frequency can’t go beyond 48 kHz. Besides wav format, the H2 lets you record directly into mp3. In this format, the Zoom can go up to 320 kb/s, in 44,1 kHz maximum. Another limit: you can’t record in mp3 when in 4-channel mode.

In addition to it’s recording capabilities, the H2 has quite a few audio editing tools, such as normalization, divider, track marker, time stamp, mp3 encoding, repeat playback, low-cut filter, compressor/limiter. Even though it’s pretty complete, I would still recommend editing audio on a computer because the H2’s screen is rather small and the its display settings are limited. Other than the aforementioned tools dedicated to audio treatment and recording, the device has a metronome and a tuner. The latter lets you choose between guitar or bass tuning and also open tunings. You can also choose the frequency of you’re reference pitch (A from 435 Hz to 445 Hz). This precise tuner comes in handy right before recording an acoustic guitar for example. This helps you avoid recording an out of tune guitar.

The Zoom H2 lets you record from the mics in the front and in the rear. This comes in handy when you have multiple sources, like during a rehearsal, when you need to record in 360 degrees. Plus, the H2 completes this feature with a mic positioning tool in 3D called 3D Pan.

Note that in 4 channel mode, the H2 creates two files (F) for the front and (R) for the rear. It’s therefore easy to adjust an ambiance recording while taking into account the limitations of the place… this is important!

As soon as I started using the H2, I realized that navigation between menus was quite easy. Seriously, anyone can figure out how to use the menus in 5 minutes. On the other hand, it would be a good idea to read the manual thoroughly for mic positioning. The H2 seems to be very stable, I didn’t have any crashes or rebooting issues while testing it. Plus, updates are regularly released by Zoom, therefore I suggest you visit their website.


One annoying detail: when you need to change the batteries or want to get to the SD card, you have to unscrew the stand since it blocks access.

To give you a preview of the H2’s possibilities, I took the H2 along with me to my group’s rehearsal. It’s still the best way to test the device!

The first extract was recorded in the rehearsal room, around 25m2. The sound, recorded in 16 bits and 44,1 stereo is very good and precise. One should note that the mics are very sensitive and therefore you’ll need to turn the sensitivity down or you’ll get distortion. The next extract was recorded in the same conditions, but this time 4-channel mode was activated (actually both stereo mics together). In addition to the louder volume (due to the number of active mics), you can hear more precision in the recorded sound.

In mp3 mode, tested here in 320 kbps (the best), the sound is virtually perfect also. Nevertheless, during tests in 96 kHz/24 bits, I experienced some pops in the sound, giving the impression that there was a buffer issue (the typical noise). This is no doubt due to the speed of the SD memory card that comes with the device.

Overall, its sound is really clean and usable for recording ambiances. When the mic preamps are too high, there’s a slight hiss, which is understandable is this case.


The Zoom H2 is definitely not the best recorder on the market, there’s no doubt. It’s plastic casing is a little flimsy, and you can feel that you need to be careful with it if you want to keep it for a few years (I recommend changing the case/bag: the original one doesn’t protect it at all!). Plus it’s not reparable so once it stops working it’ll go straight in the trash.

But at 199 euros, it has enough performance for a musician not looking for a pro recorder. The mics are more than adequate , recordings of our rehearsals seemed to be very good and clean. A very nice point: the front/rear mics gave a nice ambient sounding recording in 360° mode.

In addition, it’s menus are simple and it’s easy to record in different formats on the same SD card. No time is lost with the H2. A few seconds are all it takes to modify some parameters. Its ergonomic design was well thought out and you can easily place the device on the ground.

If your looking to buy a good recorder without going bankrupt, the Zoom H2 is the perfect solution. On the other hand, keep in mind that it wasn’t made for pro recordings.

[-] Fragility
[-] "Disposable" aspect of the device, since it can’t be repaired