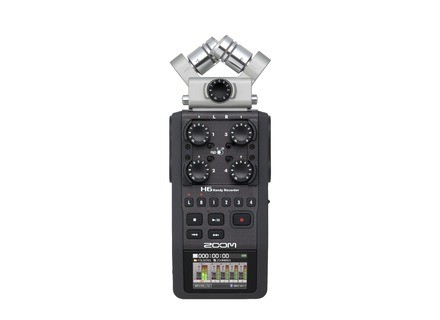 H6, Pocket Recorder/Multitrack from Zoom in the H series.

« Limited Use for Everything but Live Recording »
3

Value For Money : Correct Audience: Beginners
View other reviews for this product:
The controls are cumbersome, at best. Between the Menu switch and the arrow slide and switch, you can eventually get most functions to work if you are patient and memorize the weird defaults. Unfortunately, the mixer does not function as a tracking mixer, final mixdown only. As if anyone but a very poorly equipped hobbyist would ever mix down using the H6.

An obvious use for the H6 would be as a portable, free-standing recorder. My expectation was that I could add a sync/scratch track to a folder and add other instruments remotely to the recording for later extraction and adding to a session in Pro Tools or Logic, etc. Zoom engineers have decided that "overdubbing" is only for adding one track at a time. Oddly, Zoom has taken 50 years to not quite provide the function of a 1970s Teac 2340 reel-to-reel. Someone needed to learn something about multitrack recording before being allowed to play with product development.

The sound quality of the H6 preamps is fine. The preamp controls are clearly marked and easy to use. The XY, M-S, and extra non-phantom-capable extra pair of pres are decent. If what you want to do is record 6 tracks simultaneously and as a free-standing remote recording deck, the H6 will be fine.

I discovered that the engineers didn't think much about typical remote applications, though. Connecting the Zoom pres to a splitter that allows a preamp's phantom power to the Zoom will wreak the H6's phantom power. It's hard to imagine not being able to protect a current limited phantom supply circuit from something as common as linked phantom power, but Zoom failed that test. Be super careful with splitter use. If they aren't fully isolated, the H6 will probably self-destruct.

Obviously a work-around to the overdubbing flaw is to use the H6 as an interface and do the sync signal with a computer. As an interface, the H6 has a lot of better priced and featured competition. The whole point of the H6 should have been to be a free-standing, multitrack recording system.
Did you find this review helpful?yesno