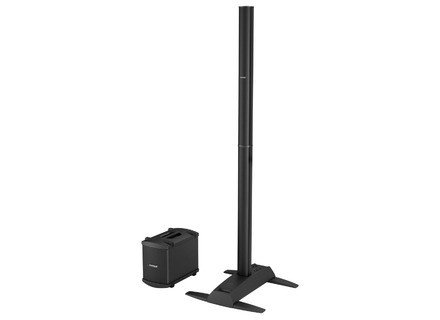 Buy this productView price information >
View other reviews for this product:
For how long have you been using it? What thing do you like most/least about it? Did you try many other models before getting this one? What is your opinion about the value for the price? Knowing what you know now, would you make the same choice? ...

I use it for two months. My use is a little margin because I'm playing guitar "electric" and not "acoustic". Population guitar is pretty conservative as everyone knows and I think many will doubt my words, though .... I can only encourage them to test themselves ... I doubted myself a lot of opportunity there to play it like a guitar amp because the system is presented more as a sound system for acoustic instruments and singing. But the sound and especially the popping sound is masterfully restored. I do not really see any significant difference with a guitar amp lamps ... Of course, I had to rework my sounds and adapt them to Bose. Using an HP calculator is obviously essential. I tested with a preamp Rocktron Voodu Valve and software with Guitar Rig 3. That giant ...
The peculiarity of the L1 is to restore the sound in the same way regardless of the place of the listener ... The audience hears the same thing so that the musician and that he is in front, side, far or near. No need to back then. The cons part is that you really play clean because the sound is very precise, detailed and clear. I tested outdoors in front of 300 people in my home studio (40 m²) is really amazing. I play on BT Satriani, Jeff Beck, Pink Floyd, Santana, Gary Moore, Hendrix, Toto, Carlton, etc.. Many people told me they had the impression of listening to a disc, so the sound was nickel.
What I really like is of course the convenience and light associated with its huge gear. Especially as using as a Chapman Stick and a MIDI converter for playing synth sounds, I have all the same ...... boiboite The space saving is significant and it is much easier to manage ...
I had a lot of amps before, the sound systems too ... No equivalent!
The price? It's expensive for sure but given all that it replaces, it is not that much.

I would do without hesitation that choice, especially since I enjoy the "promo" Bose summer mixer ToneMatch was delivered free (500 euros won ...).
See the source
Did you find this review helpful?yesno
Cookies help us improve performance, enhance user experience and deliver our services. By using our services, you agree to our use of cookies. Find out more.