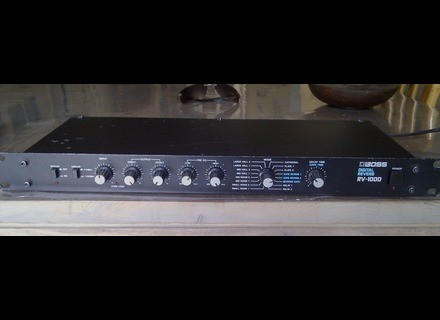 Value For Money : Correct Audience: Anyone
View other reviews for this product:
I was a young kid looking to make sick beats in the early-mid 1990's on a super shoestring budget. A little Mackie mixer, a few cheap Radio Shack mics, a 386 computer to store tiny samples, a DCC (Yes! A DCC!), and a DA-88.

In that pile was the BOSS RV-1000 reverb. A little store had this on clearance for about $100 around 1995. I grabbed it, and was very happy with it. It was straightforward, easy to use, and saw a lot of use.

It also had its serious downsides. The presets were just that. No tweaking, etc. What you selected, is what you got. The wet/dry knob was nice. The pre and db switch was helpful, too. Lots of my very horrible recordings utilized different wet/dry settings with lots of left/right sweeping panning. Apparently, wild left right made it better, lol

I also discovered why it was on clearance. It saw better days, and had horrible background hiss. Some presets were worse than others. The hall was less noticeable than the plate setting, for example. I have no idea why that was. Either because it was lower end, my gain was too high, or something was wrong with it. I am sure it was the latter. Again, that thing must of been kicked around a lot.

I am surprised to see this unit on here. That takes me way back. Such good memories.
Did you find this review helpful?yesno
Cookies help us improve performance, enhance user experience and deliver our services. By using our services, you agree to our use of cookies. Find out more.