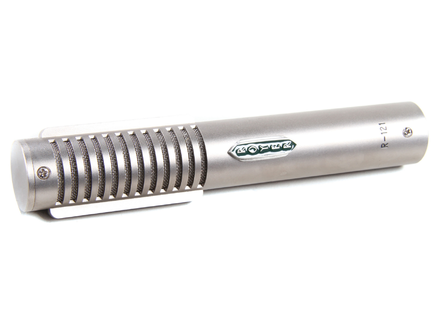 Buy this productView price information >
View other reviews for this product:
The Royer Labs R- 121 mic is a weird looking device in my opinion but that doesn’t mean the sound isn’t good. with a permanently polarized 16-mm (0.63")diaphragm element and a preamp that requires 48V phantom power. It is built using a chassis for a large-diaphragm mic, i.e. a cylindrical box normally used for mics with diaphragm diameter of 25mm (1") or more 16-mm diaphragm size does not allow one to put it in the true large-diaphragm mic category (More on why later). It has an almost flat frequency response from 20Hz to 20kHz and cardioid pattern, but has no bass-roloff switch or 10dB attenuation pads. Comes with a pivot stand rather than a shock mount.
Overall the mic sounds very decent for the money. A couple of observations. In my experience the mic meets the frequency response specifications and even exceeds the given range (picks up to about 23kHz). The mic is tailored for closer recording than regular studio condensers: 6" to 8" rather than 12" from source. It has almost no proximity effect when used on vocals but substantial proximity bass boost when used on acoustic guitar (which you have to remove with EQs since it has no bass-roloff switch).


Acoustic guitar and vocals sound very natural, guitar sounds very good with pick/strumming noise adding a nice bright touch to the recording. It sounds decent on shakers but would not be my first choice for that. I've had some problems removing excess boominess from the bass since with guitar it does get bass-heavy, but the overall quality is commendable. Lack of shock mount and bass-roloff switch I'd say are where R 121 cut quality to make the mic cheaper.
The permanently charged diaphragm, it sounds comparable to the true condensor mics if not better. But electrets may lose up to 3db gam over a few years as the material charging the diaphragm gradually gets de polarized. Hope fully this mic can hold up.