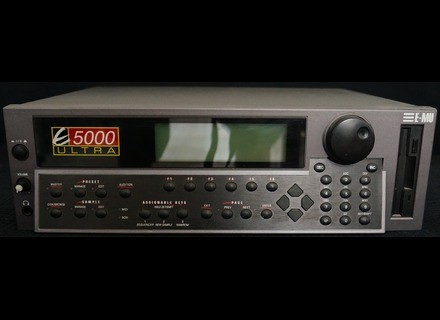 E5000 Ultra, Sampler from E-MU in the Ultra series.

View other reviews for this product:
Dj said

The general config is a bit confusing at first (menus and sub menus)
but is accessible via three buttons on the front + programmable
edition of the sounds is pretty complete but I do not like the edit mode envelopes (drawing not very representative)
fx at the rest of a classic
the manual does not go into details, no tricks, rather crude ...
The internal sequencer is much less interesting than a pc via external sequencer example with which one multiplies the comfort of work for the creation of song.
I must say that since I reconnected my computer and sequencer, sampler I found
more interest my eyes and my ears ...

31/12/2007 edit
after a little over a year of use
edition of the banks, presets and samples is rather difficult this can be daunting
but you can copy a preset "standard" to replace then the samples. This is particularly interesting To create a bank soon.

Converters are more transparent than my old 4000 esi
effects are mild and without personnalitbr /> against by the filters are interesting but the digital resonator did not yet convinced.
dynamics is quite good
often lack the presets are finalized, but a gold mine of material sound
it is necessary to CRER has its own preset from the originals and use the patch coord system that transforms the modular synth or sampler in high-end expander.
edition: After a few explorations supplmentaires I find the sound possibilities are trs well made and I will add individual outputs.

A year and a half of use
I like 128 MB ram, 20GB internal SD (large storage banks)
the possibility to save the config and load at startup bank,
the dynamics of sound.
The true versatility of the machine, sampler, and synthtiseur expander.
I like less the sequencer, the config noon, fx

I used a esi 4000, an asr 10, a sp808
it is difficult to compare with other machines as they each have their particularitbr /> I bought used 450 euro in perfect state with 20 GB HDD, 128 ram and SCSI CD
Q / P excellent.
I think for the price I do it again this choice.
See the source
Did you find this review helpful?yesno
Cookies help us improve performance, enhance user experience and deliver our services. By using our services, you agree to our use of cookies. Find out more.