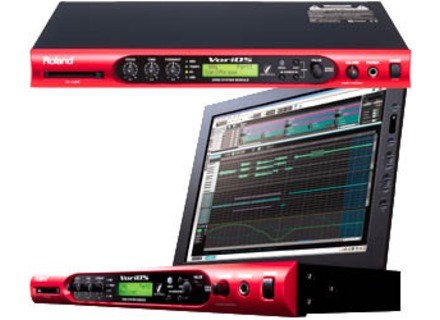 «  Stopped a project in progress? »

View other reviews for this product:
Roland Varios (Vari Open System) machine demonic, hidden son of vp9000.
When Roland introduced the one they presented as their platform 'Open System'. Open system in the sense that it would serve a different loader systems on flash cards so to be a versatile machine.
Unfortunately Roland has developed only 2 cards. Emulation of a D50 and a map Vocal designer to work on the track in real time. Suffice to say that given the price of the machine was 1300 euro + 250 euro card is expensive ca-emulation of the D50. Take as a real doccase d50 has 250 euro.
Without the use of cards is a machine tool VariPhrase, the base system is an imitation of sampler with a midi tracker integrated with its internal effect. Basically it is a daw in a rack with fontion advanced sound manipulation in real time alone, mostly pitch, the length / speed of reading and forming ...
Except that its capabilities are severely limited. Maximum 6 stereo tracks or stereo six different samples can be played in real time, as many say it's hard to lay a track with a tracker
integrated.

The configuration is special, in any case not provided for those who never open the manual.
The manual is mixed, there are clearly aspects of the machine that are not addressed. It is only my opinion, but by digging I feel that the bones of this machine was never finalized and that some basic functions to sample are not accessible.
They look like prototypes seriously. Roland Central Europe has already replaced me for a final send me back to another with the same worries ...

Ledition sounds is easy?
It speaks of the beast piano roll or audio files are encoded / 3 cut by the selection algorithms
There are several possible encoding, decoupage notes depending on the pitch, or volume of the waveform (as a slicer that detects the notes) and another mode between the two.
The single player supposed to cut out the notes by their pitch to place them correctly on a piano roll was like a melodyne is not very reliable.

The conversion is not transparent, far from it. It denatured sound enormously, to such an extent that sometimes it's bewildering. It has its capabilities to create sounds bizzard but fideilitée sound is not his forte, he is clearly the purpose of experimentation. The effects are kind of basic and kind of chain effects of non-editable type (+ chorus + deay reverse) ... A view based on taste.
* The dynamics are respected?
No, far from it was cut into bits (lol). And some type of acoustics ca does not, but all depends on what one seeks. The Amon Tobinistes will be delighted.

* What is so special that you like best
His sound VariPhrase destroy, everything that is put into it 'VariPhrase'.
I made plans with strange.
In addition to the Roland Service is the best that could Meet jai, and all brands. They offered me the card for Vocaldesigner worries.
* The least?
The method of preloading sounds via usb which is old, its limits, and its very ergonomic software interface for eddition notes.
Suffice to say that the quality / price of this machine is a full heresy seen its possibilitée asthmatics.
For me it has never been utilitée walked in saw the date on which it was released in 2005 knowing that a pentium3 on fruity loops is much more powerful, ergonomic and sonically faithful.
In addition to the varios needs a pc for eddition so the calculation is done quickly.
With experience, you do again this choice?
Uh no thank you, really. By doccase against a 250 euro, yes. He has a good sound it is clear. It is possible to Chainer 4.
See the source
Did you find this review helpful?yesno