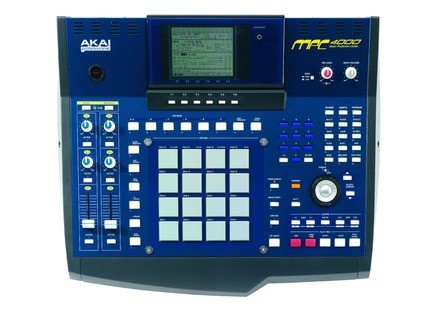 MPC4000, Sampling Sequencer from Akai Professional in the MPC series.

View other reviews for this product:
I buy 8sorties suplmentaires, history to apply for external effects and other possibilities

, it was outside the machine with these 4 outputs noon, and between the two djas level is difficult to ask for more, with phono and XLR and system usb file transfer, is more than the optional cards missing, but that's in all brands, at least I think ... I Reue 5giga with the bank sampler akai: instead of classic mpc2k, z4, z8, mpc3k, but not for the new bank mpc4k! I think it dpend more distributors rgionnaux akai that policy in itself. I was not too flach on effects, but there are probably a Manir to use them, I too feel that they sound too mtalique, must also spend some time on it to see ... As for the squenceur: I find it easy but when we got used on squenceur as cubase or other soft ... For the edition, again, it's pretty cool since "Aksys" akai allows the software to the preferences to choose which software edition, we want to use: this opens the file edit directly in the software of your choice, eg, WaveLab, SoundForge etc.

Certainly not the easiest machine at first, but given its potential, it is normal that we should some time to explore it in all its corners, I think anyone who wants to buy this expensive machine it's for good reason, this mine based on a fed up with these systems software that promise a lot of possibilities but we are sleepless nights rsoudre computer problems, I am not zicos computer, so a CT mpc4k is complicated but more for reasons of interface, it is difficult as the music can be ... In all the knobs and sliders assignable give access tons of possibilities. But some dtails enlve him a direct Accessibility assistive technology software for example you have to go through the menus to transfer or to a solo track. The manual is made Manir understand the operation of the machine, but it is not at all sduisant: couraging shots and copy and paste of references that do not exist, eg "for the use of effects see manual" part that is described in the manual I have the impression that the cem who described it is not amused! In any case, we do not want to dive back there!

As for sounds, since it is a sampler 24b96kh this dpend only user of its choice and its rglages. For the ism, I must say that the neighbors really thought there was a battery home, I must say that some drumkits particulirement are effective, I do not know if the pads could VLOC be a little more flexible, it is true that one is tempted to bourinner over like crazy, knowing that the indoor, there is the hard drive, but running mode, it can make subtle tricks. And all that needs to pter, it must be to fool VLocity!
But the issue of same pchu's all quite impressive, with Aksys is not difficult to quickly compare the quality of output it they akai any pc with any sound card!

I use it for 1 year yet intensment I at the same time discovering the andromeda which occupies much of his head ct and the goal is to drive with the andro MBM, I'll let you know of evolution

, I also galre TRANSFR some files "recycle". 16slices It's probably because of the maximum, which transferred to m'empche rer compltement my pc work of the MPC!
I did not try other models of sampler, as I said earlier, I was fed up of pc problem! And issue price for the equivalent version soft more hardware, I'm not sure if it would cost less CHRE, the price of other apps and plug in more than 1000 ... It is sure that the machine is not very heavy for its price, when it opens it to find a quantum universe consist of mainly empty, but the cd cubase sx how it pse?
I think I would do the same choice with an option that does not exist yet: a keyboard, a mouse and a VGA output. APRS takes the computer is the LCD screen ...
See the source
Did you find this review helpful?yesno