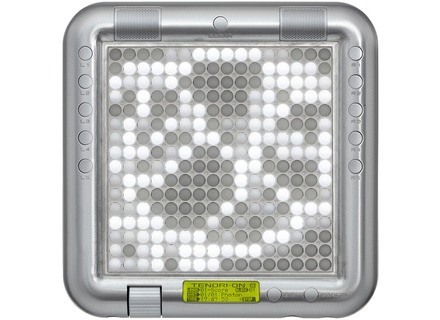 In the world of electronic instruments, when you think innovation, the name Yamaha rarely comes to mind! Yet this Japanese company was the creator of the first FM synthesizer, the DX7. So just to show you that they can still innovate, Yamaha has created the Tenori-On, a sort of UMO (Unidentified Musical Object) halfway between a musical instrument and a portable game console.

In the world of electronic instruments, when you think innovation, the name Yamaha rarely comes to mind! Yet this Japanese company was the creator of the first FM synthesizer, the DX7. So just to show you that they can still innovate, Yamaha has created the Tenori-On, a sort of UMO (Unidentified Musical Object) halfway between a musical instrument and a portable game console.

At first glance, it’s tempting to compare the Tenori-On with devices that look similar like certain MIDI controllers (Monome for example). Although its 16x16 button grid might make you think this, the Tenori-On offers much more than just a MIDI controller. It’s a tone generator, a sequencer with multiple modes, and a sample reader all in one. The Tenori-On therefore has much more to it than just what the buttons might lead you to think...

A bit of its back history and philosophy

Originally, the Tenori-On concept was developed by a member of Yamaha’s R&D department (its motorcycle section!) in his free time ... Once the basics were well established, Toshio Iwai (the illustrious creator of ElectroPlancton for Nintendo DS) finalized the instrument. Though he’s adept at audio and visual experiences, Toshio Iwai is not really a musician. That’s why one of the basic axioms of the Tenori-On is that it is not designed specifically for musicians, but also geared towards visual performances as well as audio. Therefore, as we’ll see, the instrument is missing some features that can be found almost everywhere else. This does not stop it however from offering innovative performance modes and work flow.


Out of the box

In reality, Tenori-On is smaller than I imagined after seeing it in pictures. But because of this it’s easy to hold and use. As far as manufacturing quality goes, there’s nothing amiss. Although, once again, photos I’ve seen give the impression it’s plastic, but it’s not. The hull is in varnished magnesium, and gives the impression of being robust. Moreover, this elaborate hull probably accounts for (in part) the high price!

As for connectors, there’s not much: there’s a single mini-jack line out for headphones or to connect to a sound system. Moreover, the use of headphones will seem to be almost necessary after you hear the sound quality of its 2 integrated speakers (1 Watt), you realize that they’ll never do for anything other than some brief sound monitoring.

It should be noted that there’s no direct output volume adjustment, so you need to use the menu to do so!

In addition to the aforementioned phone-out there’s a MIDI, mini-din, connector (IN and OUT). At the top of the device, there’s a slot for SD cards, which lets you import your own samples into the Tenori-On, with some limitations that we’ll see later.

Power can be provided via the included adapter, or with 6 AA batteries if you don’t want to deal with another cable! It’s possible to use rechargeable batteries, and autonomy is pretty substantial (several hours), the LEDs used in the device are relatively low power consumers!

The 256 button grid (16x16) of the Tenori-On is of course tactile, but only on the front side. In the back, only the lights are seen so that spectators can enjoy the show as well. In use, quickly pressing a button simply plays a sound and lights up the button briefly, pressing longer keeps the light on and records the action into the sequencer. It couldn’t be simpler than that. Maybe a bit too simple since there’s no velocity or aftertouch.

The unique way the Tenori-On functions is based on both the button grid and 10 function buttons, 5 on each side of the machine. When you press one of these function buttons, the 256 buttons stop creating notes and become controllers, letting you change layers, sounds, loop length, etc.. Each function is shown clearly on Tenori-On’s screen.

The function buttons on the left (L1 to L5) are primarily for individual "layers" or instrument tracks. The ones on the right side (R1 to R5) are all dedicated to "Blocks", or patterns,… basically the ensemble of its 16 layers.

At the bottom of the machine, a jog dial with 2 buttons ("OK" and "Cancel") lets you navigate through global settings menus which include:

* Midi and sync management. Tenori-On can be set to either Master or Slave
* The backup and recall of blocks and pieces (Songs)
* Choosing the musical scales that the 256 button grid plays. By default, the machine is set up to play chromatically, each button represents a half-step. Other modes are available, like major, minor, and so on. This lets you adapt the Tenori-On to many harmonic contexts without you having to think too much about what or what not to play! This is more or less necessary since there are no indications to easily distinguish an octave or a note from another on the Tenori-On!

Let’s go into some more details...

The first thing to do is select a performance mode out of the 6 available modes in the device. These are spread out over the 16 layers, accessible by pressing the R1 button (top right). Each layer seemed to have its own performance mode which looked impossible to change. However there is a special hard to find mod that does let you change the performance mode of each layer.

The 6 performance modes are:

Reading the description of these performance modes doesn’t necessarily give a clear picture of the device! I therefore suggest watching this little video that accompanies the test, because in the case of the Tenori-On, a demonstration is worth a thousand words

Once the performance mode or desired layer is selected, then you can choose a sound among the 256 (one per button ) available. The polyphony limit is 32 notes. The first word that comes to mind when you listen to the different patches of the Tenori-On is "Japanese"! You love it or hate it, but it's very typical, reminiscent of childhood days spent playing Japanese game consoles. 14 drum kits, organ, voice, basses and other low pads make up the bulk of the sounds. Don’t expect very realistic sounds!

There’s only limited control of notes: length of the note, volume, pan. That's it! These settings are generally for the whole layer. For example, you can’t increase the length of just one note separately in a layer. It's all or none! You have to therefore make sure that you like the sounds of the Tenori-On , because you can’t really modify them, except through the use of samples, which we will discuss a little later on.

It is also should be noted that its effects are rather limited. Only chorus and reverb are available, and there are only a few parameters which are only on the master output!

The learning curve with this device is really easy. A brief look at the short but sufficient doc is enough to get you going and having fun with each mode in 5 minutes. Its ergonomy and ease of access, even to non-musicians, is truly a success!

Yamaha strongly recommends that the Tenori-On be held in both hands on the sides, using thumbs to manipulate the buttons. Theoretically it’s possible, in practice, some things are easier to do if the Tenor-On is on a kind of support or stand.

Once you master the device, Tenori-On becomes a very fun tool. You’ll quickly realize that a musician’s reflexes are not necessarily the right ones. It’s almost more interesting to be guided by your eyes as well as you ears. The forms flow together, lights explode; this device has a mesmerizing aspect to it. Performances are visual as well as sonic, neither taking precedence over the other. In all respects, Tenori-On is different from conventional electronic instruments.

Here are some of its most interesting functions:

It’s possible to link "blocks" or patterns inside the "song" mode which can contain 16 blocks. The R5 key lets you move from one block to another or to copy a block of one layer to another with a clever game of flashes. Very work-flow oriented and super convenient! Variations on a theme are made easier and more fluid.

Within a block, it’s possible via the R4 button to access a way of managing the volume of each layer with a kind of vertical "mixing board". You can also change the loop step-number of a layer (16-step by default) via the L4 button (in score). It works in the same way to change the octave of a layer (L3) or the entire block (R3).

For adding even more interest to the Tenori-On, you can expand its range of sounds via 2 methods:

The first is to replace the 3 Patch rows by samples via an SD memory card. A very simple to use program on Mac and PC can manage samples and assign them to different patches. However, there are limitations: each sample is limited to 0.93 seconds, so it will be mainly restricted to short and/or percussive sounds. And you can’t modify note length or height. The Tenori-On is therefore a very basic sample player.

The second method is to pilot external instruments with Tenori-On’s sequencer. Of course, the reverse is also possible, but to me it seems a lot less interesting than the ability to use its performance modes on a whole range of other sounds! Using Random mode on an arpeggiated Reaktor patch is a revelation! In addition, all trips are possible. For example, nothing is stopping you from changing the note on/note off instructions to Control changes (via software like Midi Tools) and create interesting envelopes or filters.

The Tenori-On really stands out from the rest, both with it’s very limited features in some aspects, and its completely innovative ones in others. What destabilizes the average musician is that they soon realize that it isn’t made primarily for musicians. There are large functional gaps that are obvious to aficionados of electronic instruments: it’s impossible to edit sounds, basic management of samples, etc.. You must therefore change your way of thinking and let yourself be guided by the instrument, approaching it visually as well as sonically. The different performance modes open up new perspectives and fortunately MIDI capability expands the possibilities of the device. But innovation and originality have a price. At $1200 MSRP, even if the manufacturing quality is very good, its limitations will start to be felt by your wallet. But it has a "endearing" quality to it that’s non negligible, and has been adopted by many artists, including Bjork. So a final verdict is very much based on subjectivity. Either you’ll enter fully into the strange world of Tenori-On, accepting its limitations, or you’ll fall back on something a bit more classic. I have chosen: I'm a fan! and you?

[-] A lot of limitations and functional gaps
[-] Sample player is a bit basic
[-] Sounds: Either you love them or hate them
[-] Pricey despite a very nice look and its manufacturing quality