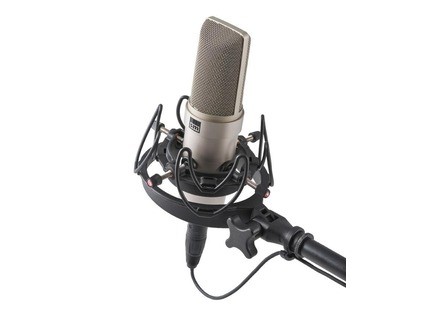 Rycote, the UK-based manufacturer of microphone windshields and suspensions, is presenting the InVision USM mic suspension for large-diaphragm recording microphones at Musikmesse.

The USM is on display at Rycote’s stand at this year’s Pro Light & Sound exhibition, part of the annual Musikmesse in Frankfurt, Germany.

The InVision Universal Studio Mount (or USM) has been designed to provide a 21st-century alternative to elasticated suspensions, the basic form of which has remained essentially unchanged for several decades. According to Rycote, the USM offers substantially more isolation from unwanted vibrations than that afforded by traditional elasticated 'cat's cradle' mic suspensions.

Based around the 'u'-shaped Lyre suspension mount used in Rycote's existing InVision suspension range for smaller-barrelled microphones, the InVision USM will fit any microphone from 18 to 55mm in diameter, including large-diaphragm models and those with flat-sided and tapered barrels. With no elastic or rubber parts, the USM does not need rethreading, and because the Lyres are made of the composite material Hytrel, they are virtually unbreakable, the company assures.

The modern design and materials used create a mount that isolates the microphone more efficiently from handling and stand-borne noise than ‘cat’s-cradle’ suspensions, according to Rycote. In Rycote’s vibration testing, the Universal Studio Mount provided up to 12dB more isolation than elasticated mounts.

Pricing & Availability
In the United Kingdom, the USM mount has a recommended retail price of £74.95 including VAT. In the USA, the USM is available via Rycote’s distributor Redding Audio (see www.reddingaudio.com), and retails for $119.95.

For more information and pricing in European territories, come to Rycote’s stand in Hall 9.0 (B32) at Pro Light & Sound / Musikmesse 2010.

More information about the USM is available at www.rycoteinvision.net.