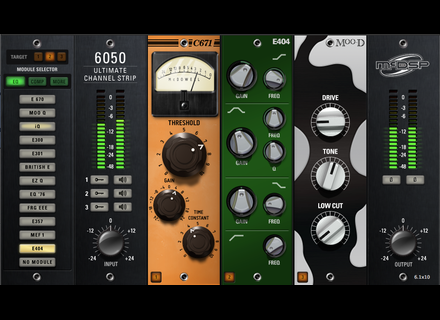 Following the current trend of modular channel strip plugins, McDSP has announced the future release of the 6050 Ultimate Channel Strip.

The 6050 Ultimate Channel Strip includes all the modules from the brand's 6020 Ultimate EQ and 6030 Ultimate Compressor plug-ins, adding extra modules such as gates, expanders, signal saturators and specialized filters.

The 6050 Ultimate Channel Strip features input and output stages, wrapped around 3 module bays in which any of the over 25 included modules can be inserted easily via a simple drag and drop so as to rearrange the signal flow. A module selector panel allows quick auditioning of equalizers, compressors and additional effects.

Like the original 6020 and 6030 plug-ins, each new module in the 6050 is inspired by classic and modern designs from over the last four decades. Operation is announced as simple and intuitive, and the sound quality as up to par with the developer's reputation.

As usual with McDSP, available formats will include AAX Native, AU and VST for the Native version while the HD version will also include additional AAX DSP.

No MSRP or release date was announced as of yet.