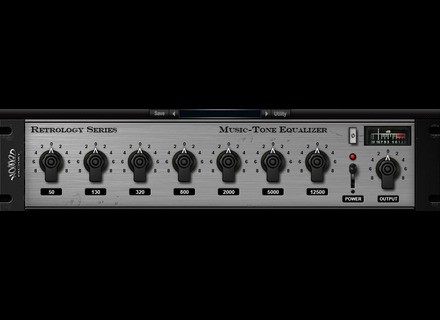 The Nomad Factory Music-Tone Equalizer is one of two plug-ins that makes up the Motown Studio EQ’s bundle, along with the Retro Film-Tone Equalizer. The plug-ins aren’t completely separate from each other, as they work best in compliment, often even stacking them, as they each have frequencies to choose from that the other does not. These are modeled after the old Cinema EQ’s that were used on all the classic Motown records, with URS also having a plug-in version of these EQ’s. I don’t own this plug-in bundle but have been using it a bit at the studio where I work. It’s a super easy to use plug-in, with the same interface as the Film-Tone EQ, just with different frequencies to choose from. It’s got seven bands, each fixed at a specific frequency ranging from 50 Hz to 12500 Hz. It also has an overall output knob and a phase reverse button, keeping with the original hardware versions. The plug-in couldn’t be any easier to use and unless you’re having a problem with installation, I’d say that the manual isn’t necessary.

The studio I work at has the Nomad Factory Music-Tone Equalizer and the Motown Studio EQ’s bundle running on a few different systems, all of which are Pro Tools HD based. I’ve never had a problem whatsoever running the plug-in on either of the systems that I’ve used it on, but have also never had any problems at all with plug-ins in general. I’d still think that even if you were running this on an LE system or something comparable that you’d be just fine as far as performance goes.

While effective, the Nomad Factory Music-Tone Equalizer isn’t my favorite EQ plug-in out there. The Motown Studio EQ’s bundle in general isn’t all that impressive to me, perhaps because I’m more used to using the URS version of these plug-ins which to me sound better. This one is still pretty solid, as it’s easy enough to shape your sound a bit with it, but definitely use it in tandem with the Film-Tone EQ since they have different frequencies to choose from. I’d recommend the URS version of this bundle, but it’s still worth checking out the both of them to decide for yourself.
Did you find this review helpful?yesno
Cookies help us improve performance, enhance user experience and deliver our services. By using our services, you agree to our use of cookies. Find out more.