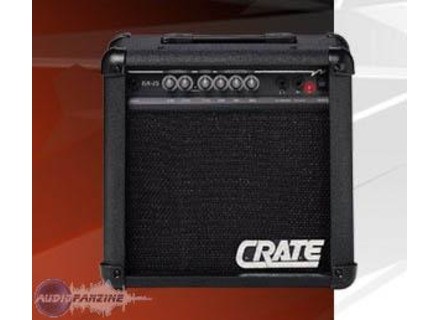 View other reviews for this product:
Amlpi 15 W transistors

Connector: 1 input jack, a headphone and one between between micro
rglages super simple: bass, middle, treble. Push a button gain / clear, 1volume gain and a volume knob and a clear SETTING THE gain.

and without any effects.

8, because for this price and this config. 15W to not ask the moon. available as the only effect of the reverb version GX15R. There's everything right. the minimum. noted even when the gain knob spar and push clean / gain (often on a single button pti amplifier for clear and distortion ..) he the senior class.

Super simple setup, you can not go wrong. is also a pti ngatif rglages so little. it's not too hard had a good sound, all fawn there's no much choice ...:- P

but given the quality of both pti cube is easily obtained a good sound.

I recall the manual more too but hey There's also the essence, with some small rglages for blues type sounds, types or hard rock ... I just tried me to see but if not I got put on its own.

I play mainly mtal, and cole super. Submitted disto a good, rich enough, and that does not sound empty. trs sound is good, and if one has a good scratch, was really going to do it. I have a personal DK2 Dinky with Duncan and fuel design really well even with microphones means. a friend tried it with his fender strato Mexicos and has transformed from Knopfler hetfield! (Roughly EXAGRES ... should not either!)

- I also play more blues, rock, or clean, and I must say that a will, even if the field remains the prdilection very heavy distortion. Fidler is fairly sound, but your stuff adpend wood!

10 because the distortion is simply exeptionnelle this price and size of this amp. no competition!

I have been using .......... 9!! and yes I know it's my first amp, and I worry I encore.mais changed this year (a Peavy or a crate 50 or 65, by the way if you want to advise me, do feel free!)
proof so that this amp can do a good job trs and is robust. I even jou in a group, but the faster it atteinttrs its limit and becomes trs screaming ... but that's normal. So if you play in groups, it is not a good plan if not as I di before there's no concurrency this price and size ...

I read on a com for GX15R for a little more money would be better to Marschall, all wrong! Like its big ERRF (MG 100 for example) is far from trs sound as strong and powerful that the crate. Peavy on the 15 is a stew. That's all what I tried.

Of course I would do this choice is by far the best, and if I had more money, I buy a 30w ... not a Marshall 15w 0.2 cts. because at 15 there's no better.
See the source
Did you find this review helpful?yesno
Cookies help us improve performance, enhance user experience and deliver our services. By using our services, you agree to our use of cookies. Find out more.