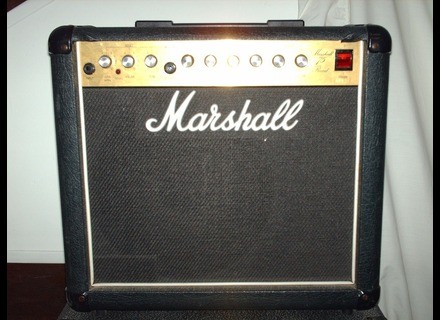 View other reviews for this product:
It's a transistor amp with reverb 75 w analog séparée.il a spring has an output jack traditional output footswitch, an effects loop on the back.
It dates from the 80 I have no idea of ​​the date in question, and I find very little information over the web, a priori, this amp is not very common.

I buy a flea market during the time for the modest sum of ..... 150 fr! there had a problem with reverb, in fact it was just the springs were gone! not a great deal!
So I have no manual nor the footswitch!

there are a lot of settings:

You can really settle it with onions!

I play it with mainly guitar humbuckers, I also have a stratocaster.

The resulting sound is very vintage, it sounds almost like a little lamp of the first series Valvestate out later, but warmer.
This gives a clear sound jazzy, it is not too crystalline at this level but the sound is very nice and friendly! it's almost acoustic.

In full, the receiver comes into its own, the crunch is perfect for the blues, climbing on optient a saturation limit Led Zeppelin's rock, climbing is a little heavy metal sound optient but without falling into the fat saturation trash-death.
In fact it has a very rock, but with the addition of a distortion pedal to the metal canl clear, it does matter!
or even an overdrive channel coupled with the saturated, it sounds very heavy, although the trash slayer.Des time I put a tube screamer ibanez on boosted channel, it matters to him more and it moves pretty violent!
This amp will please those who love Vintage sound.

I have since 1999.
I like this amp, it is powerful, it has a very personal and we can shape the sound you want, I regret not having the footswitch and especially not find the model that goes with it!
I try a lot of amps, and before buying one if I had mostly small amps 25 -30 watts, this is my first marshall, honestly I got attached, but now I am looking Instead, a modern sound that I can not have him, but I do not mean to part with it, or else for another marshall but I would have tried one that makes the vintage sound and modern sound, no obvious !
it's good amplifier and damage it so rare to find!
I would do this purchase was primarily a marshall fr 150 for just the spring that it jumped the fact!
I saw on a website selling opportunity has $ 375 so I think it can be found in the € 250 - € 300 a can near its price point, a condition to fall over!
See the source
Did you find this review helpful?yesno
Cookies help us improve performance, enhance user experience and deliver our services. By using our services, you agree to our use of cookies. Find out more.