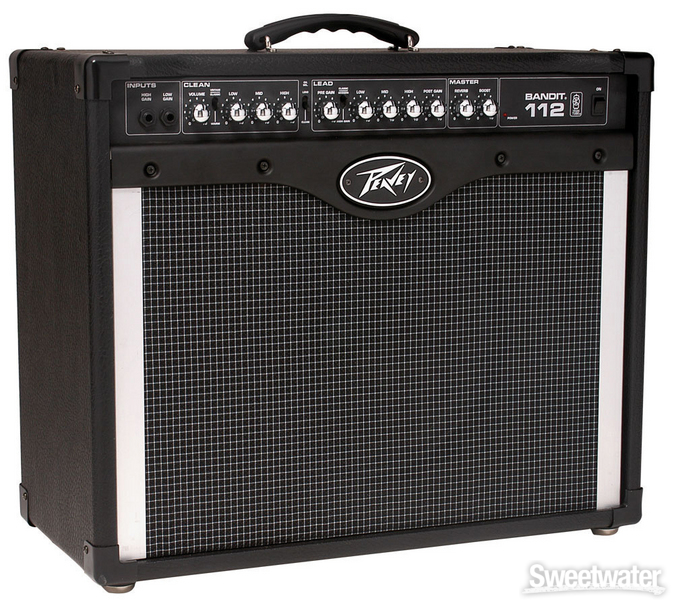 View other reviews for this product:
King Loudness

Publié le 10/24/11 à 05:13
The Peavey Bandit 112 is the flagship combo in the company's venerable line of transtube amplifiers. It's been in production for decades and has survived the changing times regardless of the era. This newest version is an 80 watt 1x12 combo with two channels, one for clean and the other for drive. The amp also has onboard reverb and an effects loop, which are very handy. This modern version of the amp has an updated and modern looking cosmetic structure with lots of classy chrome accents. Sadly though the parts on this amp do feel cheaper and more likely to break with mild use when compared to the older models. They also have a Sheffield speaker replacing the Blue Marvel version.

Getting a good sound out of this amp is pretty easy. Peavey gear has a fairly intuitive interface that is able to be dialed in for a whole host of sounds by any player. The channels are laid out in typical fashion with gain, volume and EQ controls. As well, there are voicing switches on the front panel that alter the tonal structure of the amp by giving it a more vintage or more modern voice. The transtube technology is really something cool... It does indeed make the amp sound, and FEEL more like a higher powered tube rig with more sponginess and compression to bring out natural overtones in the sound. Awesome.

The Bandit 112 is one of those amps that sounds excellent with a whole variety of guitars and tonal styles. The clean channel is very nice and pristine. It's a bit flat sounding at times and lacks a bit of the sparkle I like in a clean tone but for a solid state tone it's pretty good for sure. I like it as well when hit with more gain or a boost pedal for a gutsy and crisp blues tone. The drive tones are great too. Whether you're doing classic arena rock or modern thrash metal, this amp has a very clear and defined tone that at times really does sound like a decent tube rig. The voicing switches really come in handy here to alter the tone to different levels and types of gain structure. Props to Peavey, this is an admirable sounding rig for sure.

All in all I think the Peavey Bandit 112 is a fantastic solid state jamming amp with a great layout, cool looks and some very tubelike tones within. The parts used could be better but for an amp of this price it can be overlooked. At about $350 new these amps are a great buy for anyone who needs a high wattage combo for jamming or gig situations that sounds like the tube amps costing a lot more!
10