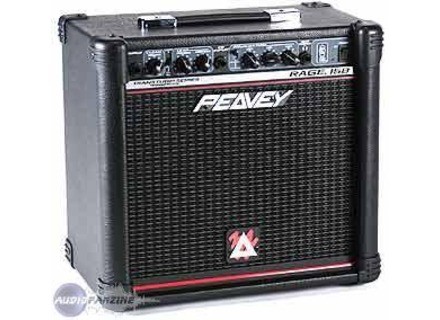 View other reviews for this product:
I acquired the Peavey Rage 158 from someone who was moving away and needed to pass the amp on. Then, I was a beginning guitarist, I'd only been playing for three or four months and I had a Johnson strat copy as my only guitar. Asides from a few dinky 10 watt practice amps, the Rage was my first serious amp. I got it because I wanted something that was capable of live play. The Rage, I believe, retails from 60 to 100 dollars...I didn't pay anything though.


The Rage is capable of a pretty big sound. As I advanced as a musician, I bought effects pedals and new guitars. I had my Gibson through a Toneworks pedal and a Yamaha Mixer, and the Rage certainly held up. The sound is pretty heavy on the Rage...As long as you put your guitar through something. If you plug the guitar straight into the amp, the sound really isn't that great or that big. But it can handle a lot of power. For the longest time, I thought it was a 40 watt amp, but it's only 15...15 watts can be more than you need sometimes. I play rythm, and if you hit the guitar hard, the rage's sound can be heard over drums, bass and a lead guitar. Trust me on that.

What I don't like is that I'm really overdriving this thing...I feel like my overdrive is artificial. Like this isn't what the Rage was meant to do. It's certainly a satisfying distortion sound through the pedal and the mixer, but the Rage is better as a practice amp...low volume, one-person amp. I don't like its sound sometimes, either. It really sounds like crap sometimes over the other amps I've got.

I know this thing is durable, but it fell apart on me last week. The electronics fell out of the motherboard, and when I tried to fix it, it didn't work. I don't know. The quality's alright, the thing can get loud if overdriven enough, but there are better sounds in other amps.

The Rage is a solid practice amp, but not enough for the gig.