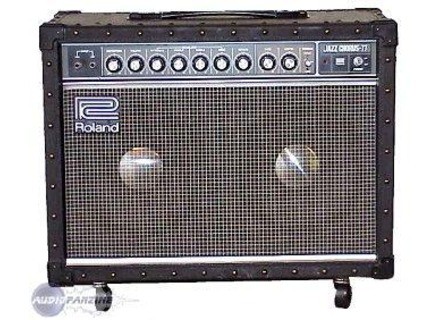 View other reviews for this product:
Specifications

Stereo amplifier (40 watts x 2) transistor the Jazz Chorus series. Built-in effects: Reverb 3 springs, Chorus / Delay (superb) and distortion. These three effects are manually adjustable front of the amp. They can also trigger in-game with footswitches to connect to the back of the amp.
Two speakers Roland 25 cm - 1 channel with two inputs (high and low impedance as a function of the amplified instrument). Back: 2 outputs (mono or stereo) for direct connection to a PA for example + 3 inputs for footswitch jacks (chorus, reverb, distortion). Equalization (accurate) is using the front panel knobs: Volume, Hi-treble, Treble, Middle, Bass (+ knobs settings Distortion, Reverb and Chorus Depth Rate + + connector 3 positions for the latter (Manual, Auto or Off).
The power advertised is undervalued. This amp "sounds" right and very strong. The power is more than sufficient and appropriate for many scenes. In concert / bar or smaller room, it will do much to himself, for larger rooms, simply the "dub" or live with the stereo outputs or with microphone (s) to HP. I've never had to go beyond the "5" volume ... Compared to many other amps (and I had the opportunity to play many of them, including lamps), c is a powerhouse almost embarrassing at times ... A "home", do not count beyond the "2", and again!

The config is very clear. The manual is more than enough (still available on the Roland site), but we can manage easily. As for the sound, it is very quickly his happiness, it is not a "gas factory".

The clean sound is downright lens! this is THE clear sound of jazz chorus, legendary and characteristic right! despite the "all transistor", I (and apparently I'm not the only one) is the warm. It is by definition, "the amp from clean" the sound, combined with the "chorus" make it difficult, when we played with, move on to something else. This amp is a very "typical" in that. Jazzmen (priority) will find them, but not only them! It is perfect for many other styles (blues, it is also a treat) ... Only reserve some distortion is often criticized ... we must recognize that this is not really the best "distortion" of the world ... but rather see it as a combination "fuzz / vintage crunch." For those looking for a real distortion, it will probably add the overdrive pedal ... and there is no problem, it sounds!
Whatever the guitar, I play sometimes with a semi-hollow guitar (ES -325), sometimes with a "strato" or a Godin Artisan is always a great sound, it's the "poly-compatible". Note that some use with a keyboard in "low" input.
I put 9 for sound, it is well deserved (if the distortion had been better, it would have to 12)!

This amp was through the JC series between the stereo big brother JC-120 (which is still made) and "small" JC-55. I acquired a quality / price very interesting report by redeeming (2200 francs at the time) to a friend who used it very little. In fact, I think this amp is well worth the price in terms of its qualities (The Son, reliability, robustness, ergonomics, etc ...). I bought it after using it a lot on stage and it has never disappointed me. Today, after more than 20 years of use, I want more and even if I happen by lazy to use another small amp (lighter to carry) during rehearsals, it's still my JC-77, which provides in benefits. In practice, the only 2 cons (relative) I can find him is his weight (19 kg), but this is nothing compared to the JC-120, which is not far from two and a slight hiss (white noise), not really a problem and you get used to very quickly.
Finally, it is not a coincidence that this amp (either version JC-120) is still used in "backline" (large scenes, recording studios and / or repetitions), his reputation is not overrated and if I dared, I would say that this is truly an amp he must have known.
Of course I would buy this amp (if only it was still made), and of course, if you find one used in good condition, go for it!
See the source
Did you find this review helpful?yesno
Cookies help us improve performance, enhance user experience and deliver our services. By using our services, you agree to our use of cookies. Find out more.