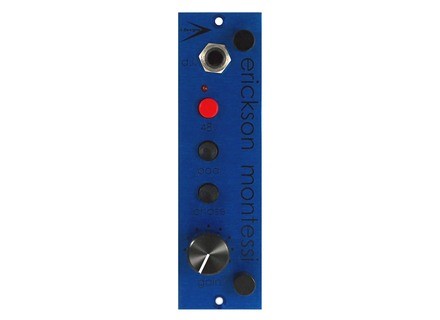 The A-Designs EM-Blue is a 500 series microphone preamp that is part of A-Designs line of different colored 500 series preamps. The B room at the studio that I work at has a rack with a few different models in this series, which I think is a really great idea. The EM-Blue preamp doesn't have any connections of it's own beyond a single 1/4" input in the front since you can't use it outside of a 500 series Lunchbox rack casing.

It's not hard at all to use the A-Designs EM-Blue if you have experience using other mic preamps. It has all the basics on here that you'd expect, including built in 48 volt phantom power, a -20 db pad, and a phase reverse button. It then just has a gain knob for setting your level coming in. That's everything that's involved with EM-Blue, so I don't think too many people will be reaching for a manual for it anytime soon.

The A-Designs EM-Blue definitely has it's own sound, especially when compared with some of the others in this line like the EM-Silver and EM-Red. The applications that I've used the EM-Blue for include electric guitar and bass guitar for the most part. I've used it as a DI for bass guitar, which I really dug as it was a nice and rich sound. I'd like to explore more with the EM-Blue preamp, but for these stringed instruments that I used it for, it really sounded great. I don't know if it's my favorite sounding when compared to the EM-Silver, but it still sounds great in it's own capacity.

If you are putting together a 500 series rack, the A-Designs EM-Blue preamp is definitely one that you need to be aware of. It's also worth it to check out the others in this line of preamps, as each has their own thing going on and it really comes down to personal preference. I've tried a few of these in this series and the EM-Blue is unlike the others that I've used for sure. It's not too expensive considering it's a top tier preamp, so certainly check it out if you've got some open spaces in your 500 series rack.
Did you find this review helpful?yesno
Cookies help us improve performance, enhance user experience and deliver our services. By using our services, you agree to our use of cookies. Find out more.