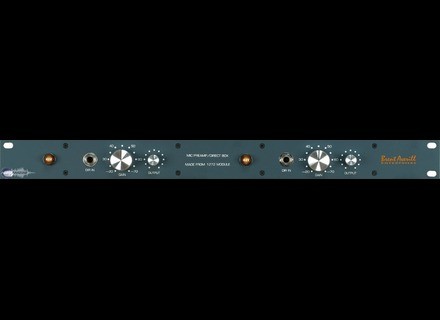 « Great Recreation of a Neve Classic! »
5

View other reviews for this product:
This is a remodeling of a classic Neve 1272 solid-state preamp. You don't need to be an expert recording engineer to know that a Neve 1272 is one of the best preamps ever made, as it's been ubiquitous on many classic recordings. I wasn't sure how the Brent Averill would stack up but I decided to try it out. It's a solid-state pre-amp, just like the Neve. It's got your basic XLR connections though the one I used was in the studio already hooked up to the patch bay. It doesn't have the Neve EQ or compressors that sometimes were part of the consoles but it is dual channel which is nice. It can be racked too which is great.

I think this is one of the most basic preamps I've ever used. It has two knobs for input and output respectively. It also has a phantom power switch which is always good to have, as it negates the need for outside phantom power sources. There really are no bells and whistles on this thing, which will frustrate some but appeal greatly to others depending on how much EQ and compression they do from the preamp as opposed to using plug-ins or outboard EQs.

This is one of the best mic-pre's I've ever used. I haven't used it side-by-side with the original Neve's which makes sense, considering that most likely an owner wouldn't have an original piece of gear as well as a remodeling of it. But I have heard both of them in action, and I must say, that I really dig this one just as much as the original. It's crystal clear and highly detailed, with a richness and fullness that is fantastic. It is really transparent as it doesn't really add anything to the mix in terms of detail, but it does do a great job of preventing the signal from sounding flat. It has been difficult to get a bad signal with this mic pre as I have found that it works well in a mix with almost anything. In fact, I often need to EQ very little to get the sound I want, as it comes through usually just how I like it (assuming I am using good enough gear of course).

This is going to be an expensive piece of gear regardless, so that must be established first. Realistically, there is no need for anybody but a studio owner to own this gear, or at least somebody who does this professionally and needs a high quality piece of vintage gear to get his job done. If you are working with modern music and don't need pristine, high quality signal flow, this isn't for you. However, since we all want that really, I must recommend it to anybody who matches the description I just gave. It's got such a great sound and will never steer you wrong. I've tried lots of different mic pres but this one just rules. Highly recommended for anyone worthy of using it.
Did you find this review helpful?yesno