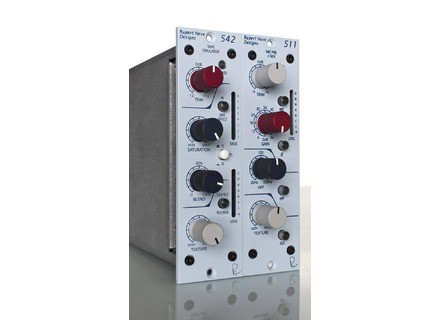 The Portico 511 Mic Pre with Silk incorporates the same preamp circuitry as the one in the 517 module, the sweepable high-pass filter from the 5012, and the power of a variable Silk circuit derived from the flagship Portico II Channel. The 511 can be used for either mic or line sources thanks to a 48V Fantom Power switch. The 12 dB/octave swept high-pass filter can be dialed-in to remove rumble or control proximity effect in close-mic'd vocals or other sources. the Silk Red mode can be engaged to add more thickness and saturate the signal as the Texture level is increased.

The second new module, the Portico 542 Tape Saturator, is a follow-up to the Portico 5042. As such, it delivers a simulation of classic tape sound through the inclusion of tape drive circuitry. The “True Tape” drive circuit works by feeding a tiny magnetic “record head,” which in turn is coupled to a correctly-equalized replay amplifier. As the voltage rises on the “record head,” saturation increases, and a soft-clip circuit engages at higher levels to round off harsh peak transients. The sound of the tape circuit can be further modified with selectable 15 and 30 IPS modes, providing a "saturation equalization" of sorts, and a pre/post-tape blend control. In addition to the tape circuit, the 542 also includes the variable Silk/Texture circuitry found in the Portico II series of modules with both Red and Blue modes.