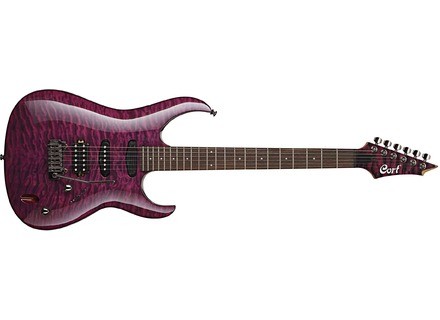 AERO-11, STC-Shaped Guitar from Cort in the Aero series.

Value For Money : Excellent
View other reviews for this product:
Scratches made in Indonesia
Wilkinson vibrato VS50II (very good)
HSH configuration (Micro MightyMite Hotrail neck, 1 single and double bridge)
Switch 5 pos.
2 knobs volume / tone
Coil tap on two double (not including the difference with the split)
Channel 22 frets D (flat end) in maple, rosewood, white dots plastoc inserts the key and the slice.
Mahogany body and maple top strainer (I have doubts about the fact that it is a massive table for that price, it would be in the dream, so I suppose it is veneer, which is all the same for all beauty), Trans Black Cherry finish, with absolutely sublime in its binding perloïd big block that sends visual ..
Chrome hardware (was quite tarnished).
Small cosmetic defects: some colored cables visible on the microphones and if you get a little closer, the cavities are quite ugly (traces yuck). Since the installation of the EMG, no more concern at this level.

Handle fine and fast, not varnished or very finely, which makes it very pleasant and made sure it does not stick. For very large paws it appears from time to time a little tiring.
This strat asymmetric shape is very comfortable and ergonomically ideal weight (mahogany and maple, but given its finesse not too heavy).
Access to acute simple as often this kind of superstrate forms, especially in position "classical guitar" (between the knees).

This guitar is perfect for what I want to play (Metal, Hard
Rock, some Blues). However, the lack of bass neck pickup and precision paradoxically remains correct, but in clean. Bof middle pickup, it goes for casseroles and more. The micro bridge sends quite mashed, without being a monster of power and precision.
I play a Peavey Vypyr 15W modeling.
Sound level, I have so a good range, but it is fairly extensive distortion easel shows that he has a little in the pants.
----> With EMG, 9/10 (see at the end EDITS)

(The following notices are time and have changed a lot with my first experience and style changes, the most recent opinion is that at the bottom of page).

I for 1 year and a half now, this is my first guitar, and I tried a Vintage SG form a Michael Kelly strat shape (the model escapes me) was € 390, a Lag Arkane 100, 2 Ibanez GIO (Strat and Les Paul shape) and a Squier Stratocaster.
I adoooooooore design really super successful, good versatility, I would have preferred a place of Floyd Wilkinson, but in a sense because I started this one suits me very well.
The value for money is quite impressive, given the level of finishes and microphones origin. I brainstormed a lot before falling on this guitar, it was a real stroke of heart, thank you Cort!
EDIT 12/09/2011:
Past the euphoria of the first purchase, some corrections: the microphone is simply not really terrible, and the micro bridge proved a bit messy in large distortion, micro neck is always nice contrast. At the bridge, a few additions too: it is beautifully agreement, and no problems to change a string. However the bar vibrato bar very easily from the slot now.
EDIT 03/10/2011:
Some corrections: single micro crappy, neck rarely used, however the bridge is very correct. The vibrato arm from fully live: not possible to examine the scratch without her smash your face, but this is a minor fault. Cables at microphones are actually quite visible and ugly traces attracted the eye in these cavities.
EDIT 16/08/2012: Microphones for EMG60X changed in neck and a bridge in 81X. The guitar is transformed by these microphones: one with the 60X has very round and cleans defined with 81X precision and power with crazy distortion. The 60X also excels for tapping, sweeping, and other shredderies

EDIT 17/09/2012: I blocked the tremolo with a good hold, sustain and maintenance agreement increased! However I am considering a change / repair mechanics corresponding to Mi acute, 2 cords at pétées mechanics in 2 weeks, it&#39;s a little shit (yet Elixir strings, not rotten in principle, and I&#39;m not excited bends of more than one tone ...). EMG sound as always, I try now to funk, the intermediate position with a good EQ setting gives the illusion of funky sound (microphones too powerful and crystalline enough to set the mood funk and casseroles single microphone that goes with it).


Basically it was worth the money, upgrade microphones is widely feasible in view of the finish and the quality of craftsmanship. With my EMG, I spend at Death Metal Jazz (yeah right I&#39;m exaggerating for the Jazz sound is not quite smooth, but fingers played with a good EQ that gives the illusion). It may even accompany me a good time!


See the source
Did you find this review helpful?yesno
Cookies help us improve performance, enhance user experience and deliver our services. By using our services, you agree to our use of cookies. Find out more.