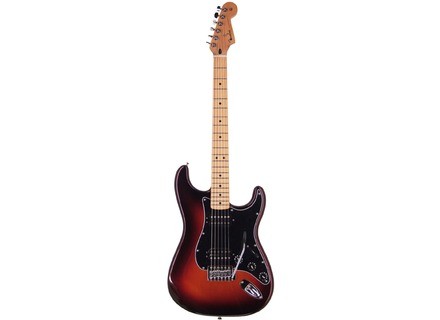 View other reviews for this product:
I bought me Arctic White Strat from Guitar, Amp and Keyboard (online store) in Merry Olde England. After buying an Epiphone Les Paul (a very nice guitar) I wanted to try a single-coil leccie and went for the one everybody goes for (there's a reason why they do). I paid £319 for it.

I wasn't sure whether to go for the Telecaster or Strat, but I thought "the history goes that the Tele came first then they brought out the Strat as an improvement", which kinda sold me. It was mainly because I'd get that extra pickup, hence more choice sound wise, so a bargain really. I was quite pleased when I found out I had made the right choice, as some of the sounds the Strat produces just make you smile... they're just simply gorgeous. It's smooth and silky (yeah, I know, I'm not reviewing a cigarette brand, lol) but also on the bridge pickup you get a nice dry, harder sound for rockier playing. Also, compaired to my Les Paul it's as light as a feather which really motivates you to practice more... and don't worry about plugging it in everytime you want to practice too, as it sounds fantastic aooustically (actually often I have to remind myself I've forked out all this dosh for an electric and go and plug it in to do it justice, lol).

Being really petty here.... that classic white Fender scratchplate makes seeing the strings a bit tricky when under strong lighting as their shadows are cast quite sharply making things confusing (but the better you get the less you look, so it doesn't become a problem after a while). Also when sitting down practicing I find that top arm can dig into your chest a bit. Well, there you go, that's it... yeah I am petty, lol

I really don't get guitar snobbery. You are not going to be sold a duff guitar by a big name brand like Fender... if you are, it's not on purpopse. This is built to the standard of any £300+ piece of electric equipment, which is professionally, solid, trustworthy and of a high quality for whatever reason the device was built for.... it's that simple. It looks beautiful, sounds beautiful and feels beautiful.

There's no genre you can't dip your toe into with this guitar. Whether you prefer to play light styles or rock. Something I once heard really struck a chord (pun not intended, lol) with me.... "I good guitarist can make his instrument sound any way he wants".... the Fender Strat is famed because it's versatile and easy to play. So buy it, you won't regret it :o)