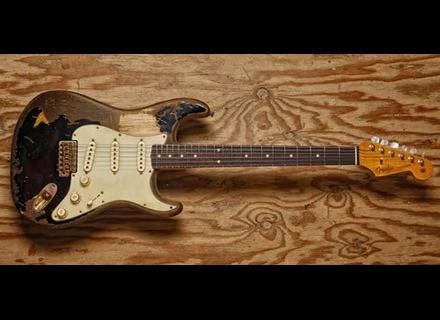 Value For Money : Excellent
View other reviews for this product:
Features:
Model limited edition of 500 copies worldwide. This model has been done in partnership with John Mayer to create a replica of his favorite guitar he dubbed the "black one". There are a series of "very" limited also to 83 copies worldwide, which is supposed to be an exact replica of John Mayer's guitar (the same pets etc. ...), but then the price should be multiplied by 5 ( about 10,000 euros!).

- Pickups Simple big-dippers (present only on this model and its signature model)
- Handle "C oversized" as described by Fender, maple, rosewood fingerboard, 21 frets
- Gold Schaller Tuners
- Gold hardware (we like it or not)
- Setting standards in all strata

So for me this is the best thing that stratum: the handle! A real treat. I played a few guitars before, Start U.S. entry-level including, but not in the top range with which I could compare. One thing is certain: it's delicious! Exceptional comfort! Once you start playing it, you find it hard to stand the guitar! Especially for people who often play with the palm of your hand glued to the handle, we see a huge difference with a handle in traditional.

- Are they suitable for your style of music?
Perfectly. I am a big fan of John Mayer so it goes without saying that it suits me. But I also play Hendrix, Led Zeppelin, Red Hot, blues, etc..

- What kind of sound you get and with what settings ("crystalline", "fat ",....)?
A well rounded and clear, rather dull (probably due to the rosewood fingerboard), in his brief clear is sumptuous. By adding an overdrive type TS-808, we get a nice bluesy sound, ideal for blues or rock-blues.

- With what (s) amplifier (s) or effect (s) do you play?
I tested it on a Fender Hot Rod and the sound is sublime. Currently I play on a Vox AC15 CC1X. It is also wonderful but I prefer the rendering on the Fender.

What are the sounds you prefer, you hate?
The sonoritées I prefer its sound clear and clean sound with the addition of a slight overdrive. On his most striking for me is obtained with the neck pickup, really musical, or the neck pickup + middle (where you get sounds very close to some music by John Mayer).
The sounds that I hate ... there is no ... but I'm not a fan of the rendering position bridge pickup, but this is more a matter of personal taste but bad sound reproduction.

- For how long have you been using it?
I use it for just over a month.

- Did you try many other models before getting this one?
No. This guitar has been very generously offered so I have not tried other models. I had the opportunity to play on the Mexican strats with classic 60-player, the American special or a les paul studio. Very good guitar for me but not worth the black1.

- What thing do you like most/least about it?
As said above, the feature that delights me most is undoubtedly the handle is just near perfection. To this I also add the neck pickup's position which is sublime on a tube amp.
The least ... um ... modest guitarist that I am I see none!

- What is your opinion about the value for the price?
Great value for money when it's a gift! The best value for money then! lol Seriously, this is a superb instrument, top quality etc, but I still find they really are abusing the price of guitars. 2000 euros it is still VERY expensive! That's why I put here a "small" 9 and not a 10.

- Knowing what you know now, would you make the same choice?
It is very simple: if you do I had not offered, I would be paid the once I was able to afford it (if they would still have! That's the truth!). So I do not regret that choice. This is the guitar that I dreamed of having. I can not even say "I have a great guitar, but my dream is to have the model foo stuff" because this is the model that I dream for a while! And not being a fan of John Mayer, it is especially being a fan of the sounds of "his" black one. An exception strat
See the source
Did you find this review helpful?yesno
Cookies help us improve performance, enhance user experience and deliver our services. By using our services, you agree to our use of cookies. Find out more.