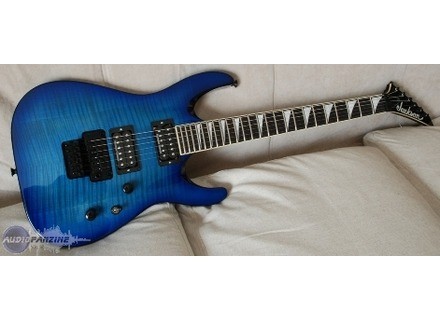 View other reviews for this product:
Sam Ash is a pretty powerful dealer for Jackson, so they were able to get a few of these guitars, but I was able to get one of them myself into the store. The guitar has the following specs:

People are more than welcome to correct me, but I don't think the flame maple top on this is a true piece of flame maple. I believe it's a veneer. The alder body as nice and light on this, so there were no issues with it being a dead piece of wood. This is a neck-thru model, so there were no issues regarding neck pocket gaps. The frets were pretty true, and I was able to get some nice, low action without much of an issue on this thing. The licensed floyd on this is the same as every other one in the Jackson line up in that it's not the best, but it works in a pinch.

The pickups in this were the Seymour Duncan JB and the Seymour Duncan 59. The JB in the bridge is great for that old school 80s metal tone. However, it can also do fusion and death metal without too much of an issue. It's an extremely versatile pickup that tends to allow the user to play nearly anything it wants. It can be a bit bright at times, so keep that in mind. The bass also isn't the tightest in the world. The 59 in the neck is pretty smooth, but it can be a touch "pingy" with this wood configuration. It gives it some cut, and clean tones are great on the neck pickup.

Another solid release from Jackson, and I really like the features on this model. For the price, it's very good value. I wish it would have had an original floyd rose installed in it, but that's about the only real complaint I can come across. The volume knob can kinda get in the way of the pickup switch, but it's a minor complaint regarding a very solid guitar.
Did you find this review helpful?yesno
Cookies help us improve performance, enhance user experience and deliver our services. By using our services, you agree to our use of cookies. Find out more.