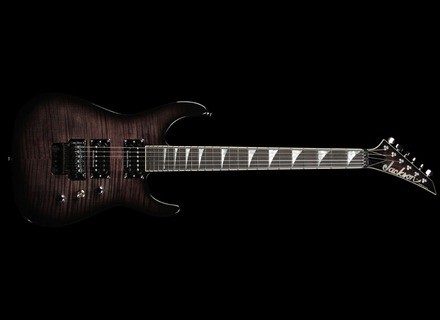 The Soloist to the handle driver 24 jumbo frets above a button in bne is Fully mahogany (neck and body). Like other SL2H, the guitar is quipedun Original Floyd Rose tremolo and Seymour Duncan Humbucker two microphones (59 in a sleeve and a JB in the bridge). CONTRL for everything we have one volume, one tone and a toggle-type switch slecteur three positions.

Do we still prciser Jackson United States that are decorated dun binding around the handle and the head? SERIES this only available in clear finish, the color is crme binding (not white). I chose mine in transparent black. It should be on the prciser SL2H-MAH, the table is a Saddle vritable table 1 / 8 ", which is not the case on other Jackson Select Series United States that that nont drable sheet, just for Aesthetics ct.

Yes, talk of your use because it does not go smoothly sest. Indeed, what was my (bad) surprise of discovering APRS few minutes of play the high E string so silent button on the edge of the output shaft of the rope came as often as Jean Alsi bowls in the gravel during a Grand Prix! APRS a quick inspection and confirmation by a luthier, he sest in April that the vibrato was poorly positioned t!?! Lhabilet thanks to Patrice Blanc, this problem could be properly rsolu for a relatively modest sum, but I remain of the same trsdu to see that this is scratched out LTAT plants in Jackson followed with his badge indicating that the quality of CONTRL does have duly effectus

Rcriminations to register, we must also note that the trigger guard of the G string on the Floyd Rose silent shaking and vibration gnrait unbearable during the game (mostly empty). I lai done replacing

Once the correct default, the guitar is rvle be a formidable instrument, playing with a comfortable handle profile plutt fast, close to that of my King V (yes, I know, cest weird because the two are not censs MODELS have the same profile sleeve), and with Access in acute unbeatable. Versatile is the almost complete thanks to two Seymour Duncan jai DCID to keep and Mount enjoyable time, however, surprised APRS daccoutumance.
Mahogany gives a lot of depth and serious guitar sound, something that could jai aisment seen by comparing it with my King V (saddle and handle alder body). The feeling is DIFFERENT with this feeling of hardness which appears to lower the strings on the Soloist while tuning forks are identical (25.5 ").

To speak of the weight jai found the silent guitar quite heavy, but within a range that a reasonable mapparat less DTRE size as half a shrimp

For large distos (mean of Metal) this guitar well filled his office. The JB has an output level plutt important with a good offense, even sil is a little perch in the high-mdiums. Fortunately, mahogany gives him a little lower and rquilibre good sound. The clean sounds are his weak point and tends nasal sound.

The microphone 59 is really good for clean sounds. He has the body for arpges crunch and so little is done quil exploitable for rhythmic funk a little support. Sounds saturssen doing well sil sagit low distortion, and plutt quen solo rhythm.

Aid by the good and the good rsonance sustain of the guitar, it&#39;s really nothing wrong nya in terms of sound. Is the versatile meeting and lon can also go ogle the ct of Rock or Blues. Only the Jazz seems to Chappe, and even the 59 could still be misled.
Dune Manir gnrale, both through their microphones confrent alnico magnets plutt sounds fat and round as sharp vritablement (Dimarzio Super Distortion Jai on one another skyscraper The diffrence is obvious!).

Testing with a t effectus LC15R Laney, a good amp to see what is the guitar.

JOperation this guitar since June 2005 and I DCID cowardice because I had a new skyscraper that I wanted Fully mahogany. Very fond of both Jackson and the rev happy with my V King bought a year ago, I chose this SL2H-MAH.

Needless to say jai t trsdu (has not changed since the second section of this opinion ...) because of my msaventure, and the number of problem quality of my statement dernirement (since Fender bought Jackson? No, this is not possible?), I became a little less enthusiastic about Jackson. Sil must add that a significant increase in rates over one year (almost 20%), there are things that go wrong (once more Fender?)

In view of the market and competition, Jackson guitars are still trs attractive, but the slightest problem abolishes any report qualitprix positive. On a guitar this price (1500 euros directly imports from the United States. In France it costs about 1000 euros more ...), the default is inexcusable.

You can not bet that Jackson will be the quality in one year for example, but it seems that current lheure be a little lucky lottery Friends, DGain your wallets!

They are lucky in that Jackson LESP Horizon NT-II is so difficult to find
See the source
Did you find this review helpful?yesno
Cookies help us improve performance, enhance user experience and deliver our services. By using our services, you agree to our use of cookies. Find out more.