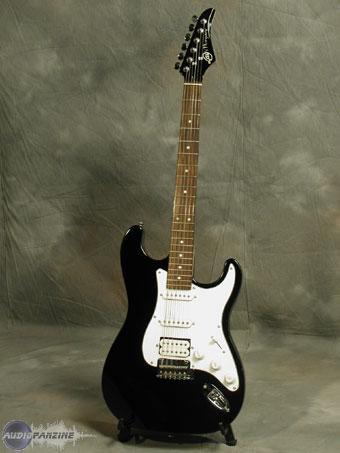 STC-Shaped Guitar from Lâg belonging to the Out of Bédarieux Collection series.

View other reviews for this product:
victhebig

Publié le 12/19/13 à 22:33
I was able to recover this guitar at a neighbor, at first sight a low-end home LAG. I did not like the lag already, because I've tried high end and blah blah ... But then I set the tremolo it is parallel to the body, well frankly, it's great!

Resonance, sustain the appointment, nice sound - reminiscent, of course, the stratos - but with a little more potato and sustain (it looks better violin).

Micro are the weak point of the guitar, they are not very powerful, but it n'êmpeche I could burst with me a little in all styles (for metal I would have put in a bridge patator home Gibson 500T genre).

Nice handle, fast, 009 strings. very easy to play with nice bends without hardly ever go out of tune! Solo is a delight in rhythmic too. I love that twangy sound that vibrates in short ...

I sold body and soul to Gibson for years, but I can only say congratulations to this beautiful skyscraper low-end ^ ^

I use the last month strongly that the neighboring forget me hahahah
The changes include: tremolo changed to a modern fender, bridges Graphtek, nut Graphtek, mechanical self-locking Sperzel, microphones probably a mix Gibson 500T in the bridge, Fender and other high-level output, change all the electronics knobs for CTS .

That said, we have before us a very good guitar from the start!
Hat Lag
00