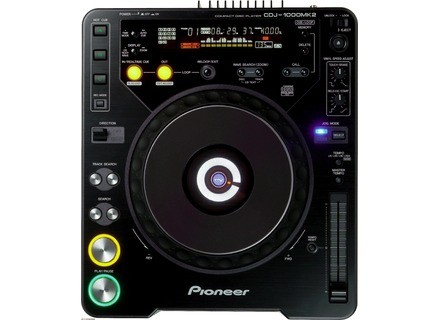 View other reviews for this product:
Hello

I have at home a CDJ1000 I use every day ... and a friend had bought a year ago a pair of SLDZ1200. Obviously I have well tested and very objectively, there is no advantage to have the Technics

A small rsumcomparatif what I noticed:
-> Posting:
<ul>
no tag on SLDZ (or it only supports one type of tag-tag1? - after what I understood ke)
no "graphic" as the track on the CDJ either,
no visual localization cue points can be registered in both the CD as one track ...
</ul>

-> Handling:
Shelf:
<ul>
simulation vinyl fish a little, because we feel a large clearance between the false bottom and the top vinyl .. the top of the plateau is really very lightweight, it feels plastic handle no more or less,
difficult to also resumed on the board despite the presence of a segment made for a. .. it can be a personal deformation due to intensive use of CDJ but I could not help but look at the display instead of numrique mark on the disc ...
after, stalling a drive: can not handle the disc in the centering, since there is no centering, but has instead, the face of the display numrique so everything is done by manipulating the pitch and plateau (some say it's not so bad ... Yeah ..)
</ul>

cue points:
to the rescue! there is a whole mthodo to ask a cue point (the point bank call, get in "record", remove the master tempo - if not the sound when you scratch PForm locally to quickly regained point Cue, and finally save the CUE)
while on the CDJ, tac you block the plate, lean on CUE and talk about it more.

loops:
CDJs unlike the first cue point is automatically recorded Whereas as the IN point of a loop ...
the IN and OUT points are not adjusted when registered (bad bad bad bad!)

samples:
it is possible to create 4 samples directly and easily, meaning you save four samples of live music. It's pretty fun
on the other hand they can not be changed thereafter (or their tempo, or their points of commencement / end). They can swing (loop or not) the current song or other piece of the same CD very easily but watch out for problems of Difference of sample-tempo song, and timing of sample irretrievable! very high risk of "colic" if too much training, so (or a vodka or two apples are in the process of dissolution in the body) ...
Via a menu you can select the fawn that we want to use the sample (in a loop, one shot ... etc) but there has Intrets know what you want, the menu navigation as a little long I can not see using it full mix ...

-> Aesthetics:
looks like Quasimodo: beeeeeelle ... beeeeeelle the SLDZ is beautiful, but, I push open doors
has rated the CDJ is still a little jog in the ac cheap plastoc ...

Appraisal:
new stuff = new technique I do not mind but in the case of SLDZ, I found much less intuitive than the CDJ ... You really acqurir new RFLEX that are not those of the vinyl ...
As long as you mix on a turntable as a password (no cue, pitch to pitch) but in this case, what Intrets?
From the moment when one begins to want CRER a loop, has become more touchy on the CDJ SLDZ ... In the IDAL should prparer his case in advance (save-all samples, loops - in an SD card) because the errors are not easily recoverable.

PS: I also added 2 pTis dtails:
- Display "Countdown" is not on mp3
- PBME distortion of the very sensitive (mainly mp3) when you scratch with the active master tempo (difficult to calibrate a CUE)
See the source
Did you find this review helpful?yesno
Cookies help us improve performance, enhance user experience and deliver our services. By using our services, you agree to our use of cookies. Find out more.