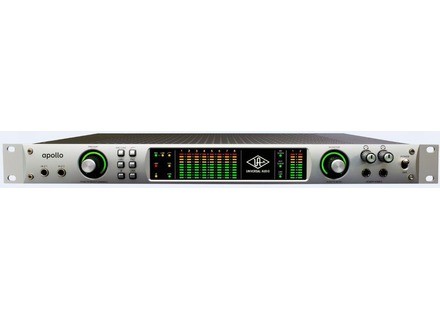 View other reviews for this product:
The Universal Audio Apollo Quad Interface is what is used at the main studio that we go to when we are ready to do some final recordings. We have used this interface over 20 times now and we love everything about it. It has 8 channels that are analog to digital. On board mixing in real-time and 8 line outputs. The Apollo Quad Interface as kind of been hour workhorse do it all interface. We get our best and most crisp sound when we use it that is why it is only done for our final recordings. With the Apollo Quad interface you are getting 18x24 FireWire, and all of the processing is done in real time. It has up to 4 microphone inputs and it supports sample rates of 44.1, 88.2, 96, 192. The latency is undetectable with the Apollo Quad Interface. It includes 10 digital inputs on top of the microphone ins.

This unit is very expensive, we are currently saving up for our personal studio to own this device because we like it in the studio that much. We will be getting one soon, we just recently started using it and wish we had more time with it but studio time is expensive. It does require phantom power. The bits per sample are 24 if I remember correctly.

Depending on what microphones you use with it will really depend on the final sound that gets recorded. Higher end microphones will give you a crisper sound, and cheaper microphones.. Well you mine as well not even use a cheap microphone with the Apollo Quad interface because no interface can make a poor microphone sound good.

We did not install the Universal Audio Apollo Quad Interface since it is not ours, but after talking with the engineer in the studio and owner they assured us that it was extremely easy and effortless. With a price tag of 2500 bucks it is worth it without a doubt. This is the first and only interface from Apollo that we have used consistently and it is now our favorite one! Any one who can afford to have this in there home studio is truly blessed. Buy it!