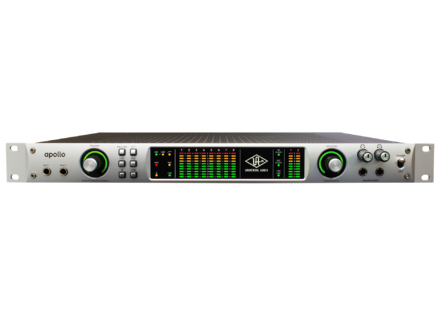 View other reviews for this product:
This is an excellent piece of hardware that would surely bring new sounds to your production. On one hand you have the massively acclaimed UA plugins, based mostly on their hardware counterpart and bringing one of the best emulations on the market. On the other, you have the actual interface that brings top class converters and vast array of input and output connectivity. It’s simply mind blowing the things you can do with it. Check out the video on YouTube where Fab Dupont explains how to connect the Apollo with the Dangerous Music D-Box.

The onboard DSP power gives you everything you’ll probably need for your session. Not so long ago, I ran a Pro Tools mixing session with 105 channels. I did not have a plugin on every single channel, but there were still a lot! It was refreshing to know that I could just put a plugin anywhere and the system would still run like nothing. I was running a 2013 Mac Mini with 16GB of Ram and Pro Tools 10.

I own the Firewire model and it definitely brings zero latency to the table. Through its two headphones output I can monitor in real time, and using the UA virtual console, I can for instance, have a compressor in the chain going into Pro Tools with Reverb on an Aux. All with no latency.

One of the things that I like the most is the 610 Tube Preamp emulation. I record with it no matter what. The default preamps is very good by itself. Pristine, that’s how I would describe it. Now, when I use it with the preamp emulation it just turns into gold. It distorts the very same way an analog tube preamp would, and adds shimmery high sparkles to the sound. I’ve used it with an AKG C414 XL II and it’s just amazing. The very first thing I used to emulation on was on a Cajon, and it blew me away the way it rounded the high frequency transients but leaving the bottom end full and punchy. Just like the real analog gear!

The 224 Lexicon Reverb is something out of this world too. You load it and you get instantly beautiful reverb that I have never gotten with any other plugin. I also own the Neve 88RS channel strip, and I’ve also had the chance to work with the real console. It is as quirky as I remember it. Great EQ but you have to go easy with it; the compressor/limiting section is spot on. The only complain that I have is the Gate. Not as usable for shaping sounds as the real one.

I also demoed the newer versions of the 1176’s and the LA-2A’s. I liked them, but to me they’re still missing the gluey factor of the real ones. I mean, the real one have some breathing in it, which is why they’re extremely regarded: you simply don’t feel the compression. The plugins don’t do this. They recreate the harmonics really well, but the compression part is still lacking IMO. In fact, I used the Bluestripe emulation on a vocal take without actually engaging the compressor, just because of the nice harmonics when I drove the input.

Of course, these are all tools. Depending on how you use them is what it is going to make the difference. That’s why the default plugins that come with it are just as useful.

Not too much to say on this one because the installation was as easy and trouble-free as you can get. The only thing is that I had to download the latest UAD drivers to run the newer plugins. Because of my not so fast Internet I had to wait quite some time to download the 750 MB file from the UA website.

The reason why probably many of you are buying this interface is because of the plugins. But is not only the plugins that you are getting, is the hardware with top quality converters and the flexibility that’s just unparalleled. Recently I test it against a Prism converter and it was on par. Really, you would have to be the pickiest mastering engineer to discern the difference.

Cons:
- The compressors and gate emulations are not that good.
- The rotary buttons feel a little bit cheap and flimsy