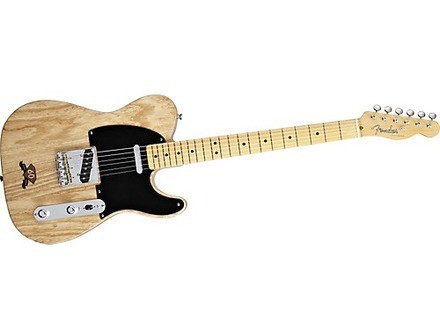 View other reviews for this product:
The Fender 60th Anniversary Telecaster was released in 2011 by Fender to commemorate 60 years of the Fender Telcaster guitar being in production. For the most part it's fairly similar to the standard American Tele. It features an ash body, a maple neck with a maple fretboard, 22 frets, standard Fender tuners, a typical Telecaster bridge with six saddles (a-la a Strat)and Fender pickups with a typical Tele control layout. It was built in the USA alongside the other Standard model Fenders and priced just a tad higher than the regular model. It really looks great and feels like a Tele should, but with some improvements.

The design of this guitar is not too bad. It's not as ergonomic as a Strat or superstrat and certainly adheres more to the school of classic Telecaster design. As a result there are no body contours and no real attempt to make it more streamlined than a classic Tele. Things like the fretboard radius and the number of frets are improved to suit the modern player, but the core layout remains pretty much unchanged. The guitar is a bit on the heavier side due to the ash/maple body and neck combo. The upper fret access is decent, but not as good as some of the American Deluxe Fenders which feature things like contoured neck heels.

Getting a good tone out of this guitar is pretty simple. It sounds like a Tele should right out of the gate. They're not the most forgiving guitar by nature, but that's part of the charm. It's fairly bright and honest sounding and works well for many different styles that require a very in your face kinda tone. This guitar doesn't sound all that different from a US Standard model in my opinion, so a lot of the same comments hold true.

This Tele definitely has the tone in spades that it should. It features many of the classic Tele specs needed for sonic armageddon. As stated above, it's fairly bright and clear sounding overall. Plugged into a clean amp like a Fender or Dr. Z really brings this guitar to its natural home. The neck pickup is great for some bassier jazzy tones, the middle pickup works well for some funky tones, and the bridge pickup is pure and simple country heaven. Switching over to a driven tone yields in some fantastic drive tones that can go from Zeppelin to Whitesnake if you want it do. That classic bright texture never gives in and allows the tones to really cut through very well regardless of how much gain you're using. It can get a little noisy with 60 cycle hum sometimes but that's the nature of the beast with single coils.

All in all I think the Fender 60th Anniversary Telecaster is a decent buy for anyone looking for a slightly upgraded version of the classic "plank." It looks like a classic Tele, the playability is a great blend between vintage and modern and the tones have a whole range that is great for a variety of styles. They are only made for 2011 as far as I know, so snap one up while you can. They're a couple hundred bucks more than the standard US Tele... well worth it if you want something that may have a bit of collector appeal down the road.
Did you find this review helpful?yesno
Cookies help us improve performance, enhance user experience and deliver our services. By using our services, you agree to our use of cookies. Find out more.