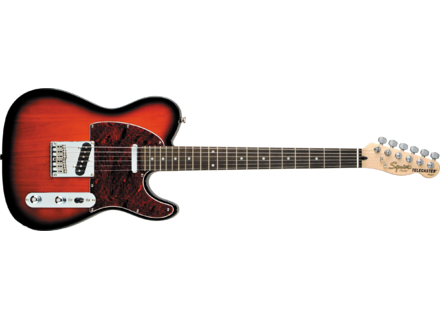 Standard Telecaster, TLC-Shaped Guitar from Squier in the Telecaster series.

View other reviews for this product:
Purchase a buddy to me refile cost: 330 euros in 1994. (?)
It's a Japanese. This means they do not Courrent the streets these days ...

Two microphones: type "lipstick" ct ct single coil neck and bridge.
A three-position knob. He had a loose connection and I replaced by a Fender.
Saddle sleeve: the sound is more brittle, but at least it was the sound of the Telecaster 1st of 1951 ... The width and thickness delight my big hands of bassist ...

The bridge is six bridges: you have a small allen wrench for rgler.
The handle does not move, it is perfectly rgl 9 years.
The frets tend to eat the mtal does not look extremely strong ...

The knobs were desirous of Tone and lost their adhsif "mtal". Pitre quality ... The microphones that slecteur falters ... Squier quality! (7 / 10) But we can always replace them with Fender.

The neck is a killer. For me, the best round of guitlec the world.
CHAC is the acute boards.
This is a guitar "plug and play" ... Simpler is not possible.

In a VOX AC30, was the most beautiful sound of the earth (except the Rickenbacker "John Lennon" which surpasses all on VOX but that's another story and the handle of the Ricken is a piti!).

I can do blues, reggae, funk (in rhythm, the two pickups together (intermdiaire position) it's beautiful!), Even jazz (not me but others have done: neck pickup only).

The bridge pickup is quite steep: its clear trs acute. on the other hand, with gain or distortion, it comes into its own.

I can not put 10/10 by dcence for owners of US MODELS. A std Telecaster us probably sounds better. But I tried and it is not always so empty. The height of the microphones is essential (on mine, they too taient prs strings to dpart). So a better "BIESSE" Japan Squier Std well as US RULES RULES evil.

I often play in open G: l was the sound of Keith Riffhards. And that's good!

This guitar is a Swiss Army knife. Simple, robust, efficient, without making head.

I use it since 1994. Apart slecteur microphones replaced all is well.

Its main advantage is that the Telecaster is placed beautifully in an orchestra without pushing the sound. It comes "pass" through all without forcing.

Attention! This guitar takes a little effort because it's not a Les Paul (who plays herself in practice, especially in a distortion of Marshall). Here, we must work to some beginners to master it. Play it like that on another guitar.

In rhythm, it remains my view Ingala.

I remember this friend who showed me his L SERIES 1965 ... When he heard my Squier, the silent dgout The pvre!

The Fender Japan are no longer manufactured (do not even speak Squier Japan). They taient so good that Fender had trouble running the trs Chres "Made in US" ... For 700 euros, it can still be found but the earplugs will fast.

Reminds me of something else. A concert of Blues. Part 1 of the group before mine ... The guitarist played a Fender Telecaster US in STD Blues Deluxe (2x12 '). What's amazing, slide: a rgal! J'cumais of happiness! Nothing to do with the sound of Gibson semi-hollow of my poor guitar (with 2x10 Fender Blues'). It also makes me mouth for 15 days for prfr (by far!) What's his. Far too serious, no really clear sound clear, runny and difficult to hear distortion even rev high volume ...

Broadcaster prototype in 1949.
Premire Telecaster in 1950.
Uncle George Fullerton and Fender have pos Lo foot on the moon before anyone else!

I do not put that 8 / 10 for slecteur, the knobs and the frets of poor quality ... For the rest (his (s), ergonomics, compared qualitprix): 10/10!)
See the source
Did you find this review helpful?yesno
Cookies help us improve performance, enhance user experience and deliver our services. By using our services, you agree to our use of cookies. Find out more.