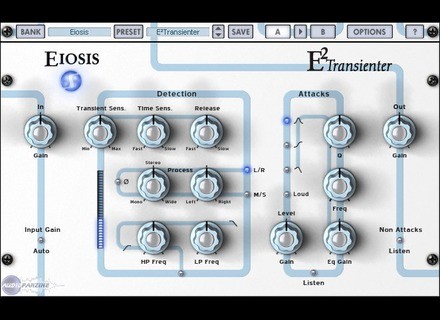 The Eiosis E2 Transienter is an in depth transient designer plug-in. It comes in all major plug-in formats, including RTAS, Audio Units, and VST. It is compatible on either a Mac or a PC as well. I don't own this plug-in, so I don't know what the installation process is like with the E2 Transienter. I've used it on a Pro Tools HD system in TDM plug-in format. The interface of the plug-in is split up into two different sections - a detection and an attack section. You can actually take out some of the parameters within this plug-in if you just want to use the basic features. It definitely took me a few uses of the plug-in to understand everything going on here, but most of what goes on here is easy enough to figure out as long as you understand what this plug-in is to do. The detection parameters are for identifying the transient section you'd like to work with, while the attack section is for equalizing the attack. I've never seen the manual for this plug-in...

The system that I've run the Eiosis E2 Transienter plug-in on is Pro Tools HD based, with an Apple Quad Core computer. We've actually got the plug-in running on a few different systems within our studio complex, but all of them are Pro Tools HD based. I've only had a need to run one or two of these at a time within a single session, so I haven't exactly tried to tax out the system with this plug-in. In an HD system, this would be near impossible anyway. Since I've only ran the plug-in in a Pro Tools HD setting, I can't really say how well this plug-in will run on an LE type of system...

I haven't used too many different transient designer plug-ins, but the Eiosis E2 Transienter is the best of the bunch that I have used. It has more control over your sound than I've seen in another plug-in like this, or even in hardware like this. You can really change the color of the sound of whatever you run through this plug-in, whether it be drums or another instrument. Drums are the easiest thing to use with this plug-in, but it's definitely suitable for any and all applications if you know how to use it. I'm not sure what kind of price this plug-in commands, but if you're looking for a transient designer plug-in, this is probably the best one you'll find out there...
Did you find this review helpful?yesno
Cookies help us improve performance, enhance user experience and deliver our services. By using our services, you agree to our use of cookies. Find out more.