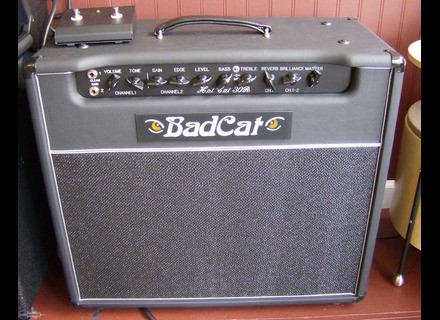 You have two different inputs, one for the clean channel and one for the gain channel. You can emulate channel switching via an AB or ABY box. The R version of the amp does have built in channel switching (I also believe it's available as a custom option, as well). There are some real benefits of this as you can easily separate effects you only want to use with the clean or gain sides. The clean channel only has a volume knob and a shared Brilliance knob. The R version also has a five way tone selector switch.

The Hot Cat 30 has the option of either using tube or solid state rectification.

The high gain channel is somewhere between Mesa/Boogie and Marshall territory. You have three different knobs that control the gain. There is a Gain knob that does what you would expect. There is an Edge knob that adds or subtracts the sizzle in the gain. For those who think that the amp is too fizzy, turn the Edge knob down to 3:00. Then there is a Level knob that controls the amount of gain signal. This knob is different than the Master Volume knob. You can get classic overdriven tones but turning them down, or crank them to get thick and meaty modern tones. The Treble knob works as a high pass filter that allows you to get a very shreddy thinner sound. There is no Mid knob, but it's voiced so well you probably won't miss it.

With the tube rectifier you get a spongier, more bouncy feel to the amp that is really fantastic. As you'd expect, the solid state rectifiers make it stiffer and slightly more aggressive.

The only sound issue is that there is some white noise bleed through if you have the gain channel Master Volume turned up high.

Despite the limitations of the amp, this is one of the best amps available. It is a very unique amp in the market place, which is probably why the Hot Cat appears to be the best selling Bad Cat amp.
Did you find this review helpful?yesno