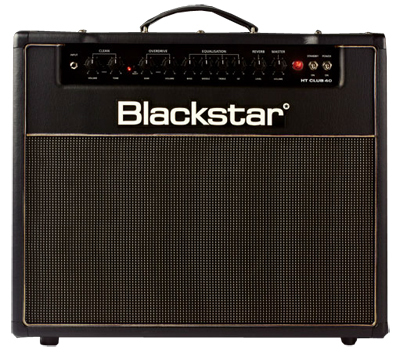 British amp and stompbox manufacturer Blackstar is known among guitar players for its Artisan Series of hand-wired amps that crunch, and its One Series, a line of hi-gain models for metal freaks. The brand is back this year with a new range of tube amps called HT Venue which ought to be less expensive but still versatile. We focus on the 40 watt combo. 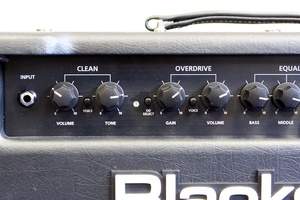 Blackstar was founded in 2007 when former Marshall employees decided to create their own tube amp brand. They started out by launching tube overdrive stompboxes followed soon afterwards by amps conceived in England and hand-assembled in Korea (the Artisan Series). The One Series came out one year later with a more modern sound and a much higher headroom. The only thing missing to round off its product range was a more affordable product line. This is what they have achieved with the HT Venue Series, which inherits some of the features of the more expensive series and benefits from the know-how of the Blackstar team.

This Series includes not less than six amps ranging from 20 to 100 watts including combos, amp heads and speaker cabinets. The model we review today is the HT Club 40, an all-tube, 40-watt combo sold for about $700.

Let’s start by unpacking the amp… 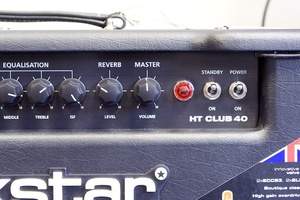 The HT Club 40 is a juicy 53.8 lbs, 24.4"×22.3"×11.7" baby. Under the hood you’ll find a preamp stage with two ECC83 tubes, a 40-watt RMS power amp with a pair of EL34 and a 12" Celestion speaker. The finish is quite good with plastic knobs and on/off and standby chrome switches. The handle on top and the dark gray cabinet covering are made out of leather. The amp looks very classy but without overdoing it, which will certainly appeal to most guitar players. The amp sits in a three quarter-closed back cabinet, whose open part is protected by a grill. The HT Club 40 seems quite sturdy and it ought to withstand transportation without a problem.

The connections include a guitar input and three speaker outputs on the rear panel: one 16-ohm output for the internal or an external speaker, plus two additional speaker outputs for a pair of 16-ohm speakers (internal+external or a pair of external speakers) or a single 8-ohm speaker cabinet. Besides these connectors, you’ll also find an input for the included footswitch (nice detail!) for channel selection and reverb activation. It also features an output with speaker simulation for direct connection to a mixer or a sound card. The sound of the speaker simulation is not the best but it adds versatility and it will certainly come in handy at times. The integrated digital reverb has a selector to choose between a bright and a warm/dark effect sound. The effect won’t replace your stompbox or dedicated rack processor but it is more than enough for rehearsals.

Last but not least, a mono FX loop with a +4dBu/-10dBV switch will allow you to connect external effect units to the amp.

Let’s take a look at the preamp settings. 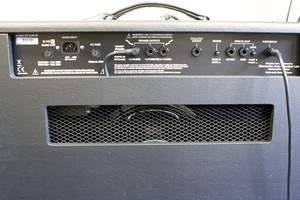 We’ll start with the standard settings before moving on to the amp’s special features. The HT Club 40 provides two channels. You can choose either one via the front panel switch or the included footswitch. The first channel is dedicated to clean and crunch sounds. Setting is very easy since you only have to deal with two knobs: volume and tone. With the volume control you can set the channel volume and thus get a clean or crunch sound, while the tone knob is a low/high balance control to get a dark or bright sound. The lead channel offers a bit more control with an input gain knob for distortion and a volume knob. The EQ section is more comprehensive with its low, mid and high controls. The master section offers reverb and master volume controls.

The amp’s special features are the Voice switches on each channel and the famous Infinite Shape Feature (ISF) control inherited from the Blackstar One Series. 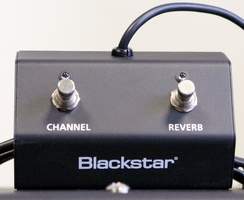 The Voice switch on the clean channel allows you to select a “boutique” sound with strong mids and highs and a heavy crunch with high volume settings, or a more modern and tighter response with more lows and less crunch. On the lead channel, the Voice switch allows you to select a classic and crunchy sound or a more dynamic and fuller sound with more mids and a smoother distortion. These different voicings provide four different basic responses already, but the small Blackstar has even more to offer!

The ISF control is a feature on certain Blackstar amps (including the HT Club 40) that allows you to shape the response of the lead channel EQ. In practice, and according to the manufacturer, it allows you to go from a typical American sound with precise lows and aggressive mids to a less aggressive and woodier British sound. From a technical point of view, the ISF changes the frequencies affected by the EQ, especially the mids. The effect is clearly audible when you turn down the mid control, in which case it allows you to radically change the response of the amp. The advantage of the ISF being a rotary knob is that you can sweep across the whole spectrum, in other words you can get a hybrid sound somewhere between American and British.

So the amp provides you with six basic sounds plus all variations in between. In practice, the result is…

We tested the Blackstar with the internal speaker and with a Two Notes Torpedo in order to check the amp with different amps and mics. All three guitars used for the recordings have quite different sound characters, so we had the chance to hear how the amp reproduces the sound of each instrument. We used a Gibson Les Paul Studio, a Gretsch G5129 with TV Jones Magna’Tron pickups and a Squier Telecaster Custom from the Classic Vibe Series, which has also been reviewed on Audiofanzine. The output power is quite high, loud enough for rehearsals and even small gigs in bars and small clubs.

Unsurprisingly, some of the different voicings produce a Marshall-like sound on both channels (clean and lead). However, the ISF allows you to radically change the sound color of the amp, extending the sound range considerably. Voicing 1 on the clean channel sounds very vintage, while voicing 2 is much more modern and clearer. ISF changes the EQ frequencies and, thus, has a strong influence on the mid range, as you can hear on the sound sample recorded with the Les Paul.

The amp is very versatile and the only reproach we have is the small lack of personality, especially on the clean channel. We do miss a 3-band EQ on this channel and even an ISF control. Everything else is very good, especially considering the price (about $700) for a 40-watt, all-tube combo. 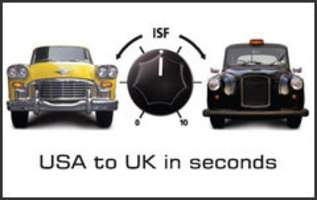 With the HT Series, Blackstar offers quality amps with versatile sound possibilities at an affordable price. The manufacturing quality is good and the special features offer the user some major advantages. The different voicings provide four basic sounds, while the ISF control affects the EQ settings of the lead channel radically, allowing the guitar player to easily and quickly shape his sound. Add enough output power to play with a band plus the footswitch that comes along and you end up with a versatile and affordable all-tube amp.
Pros
Cons
Be the first to post a comment (0)