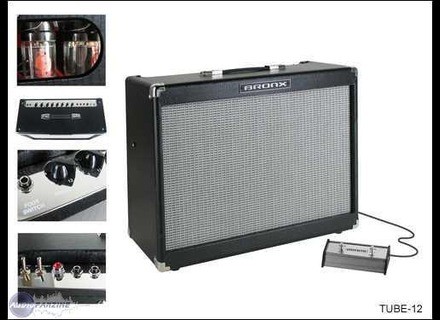 A volume knob for the clean sound (with bright button for more crystal clarity)
A gain and master knob for the&nbsp;distorted&nbsp;channel .

Large on / off &nbsp;and bypass switches

Extremely easy to use, the knobs are effective without excs trs: you can easily find the sounds that sound good, and we changed easily, without spending hours noting rglages on a paper not have his crap.
Not need the manual must be observed prchauffage a time that I fix at least 5 minutes (one technician told me that two more than sufficient). &#39;Worse dplacer with the prcautions.

I play rock ax trs 60&#39;s - 70&#39;s, and I was looking for an amp with a sound and a nice hot trs distortion. To play things like The Doors, Pink Floyd, Stones, Beatles and many more.
There are no sounds problem is sought. This amp is for the blues, but it goes well trs style I cit above. I mainly use the distorted channel (I get my clear sound in the amount of fiddling with the guitar). the sound is warm, both round and rough, after all, trs rock. The maximum gain (which I&#39;m almost always) gives a very big but does not change Figure sustain of the guitar. which is quite Gnant on certain passages of certain songs. This means rarely. Also, playing on a stratum, has nothing to thundering. With the same background distortion, the amp, adding the characters, although the return of his guitar, without dnaturer. The distortion allows play to hard rock, stoner or if you have good humbuckers. In any case useless to think of playing metal. Because of the low sustain it will be difficult replay the same modern rock. Personally I think that&#39;s good, but ...
About the clear sound, I would point out that if I prfr the Fender Hot Rod Deluxe, it&#39;s because I prfr the clear sound of more equilibrated Bronx in his clear, trs certainly good, but with low matriser difficult, the Fender.

ah, another thing: this amp made me redcouvrir my wah pedals, which is the only effect that I mount on it (until a compressor and a good quality for Big Muff pedals playing "Echoes")

(Addition) That&#39;s it, I tried with humbuckers (Epiphone Les Paul, Seymour Duncan pickups I do not know what). Well, no need to add one pedals, all things considered. Oh yes, for the stratum.

I use it for the past five months.
I am satisfied with TRS:
- Sound
- The ease of use
Since I have, I have my CHL pdalier RP7: the sound of the amp is only 90% of cases it even. Too many effects dnatureraient his sound. However, I prvois to add a compressor and a Big Muff but Manir occasionally, to increase versatility.

I am not satisfied:
- The quality of a technical point of view, reliability. December bought beginners, I DEFINITIONS lche ds home the first test (called "running a Bronx"). Replaced with a time limit of about one month (the discharge to the VAS, it is nol of FTEs), he is again trying to make me Misra (crachottements, losses momentary power enough ...). inquitantes and dsagrables It&#39;s really unfortunate for trs an amp with great sound for me. In my opinion, if the problem of quality are confirmed in other users, they justify turning to fender or other manufacturers. If however they are more reliable than this: this is my first amp lamps, and I know people who can tell me if these problem come on all the amps or not.

This is a fairly typical amp but still versatile enough unless large distortion issue, and therefore buying preferences APRS test. It does not seem to hlas trs well distributed in France.

this choice would you do?
Dilemma: the problem with the IDAL technical problem or less, but with the least IDAL? I believe that good looking I could find an amp to sound quite similar (the Hot Rod is close trs), a price close to (the Hot Rod has a price close), with a look as good (the Hot Rod the same look as the Bronx copy the look of the Fender, you follow?), and especially a better quality.
Won this amp be known without its technical problem. If it holds up, I&#39;ll do a long road with.

Last edit, 11/2005: RIP my Bronx: APRS great Lumire the rear, followed by a smell of brl he joined the rparateur, who diagnoses a problem capacitors and switching relay. Back. Jouage music. Ptag fuse. Turners store, diagnosis: bp ct the output transformer. The store shall decide to unplug the machine, and signs the dcs.
I have not the courage to change the note, put the one you like.
See the source
Did you find this review helpful?yesno
Cookies help us improve performance, enhance user experience and deliver our services. By using our services, you agree to our use of cookies. Find out more.