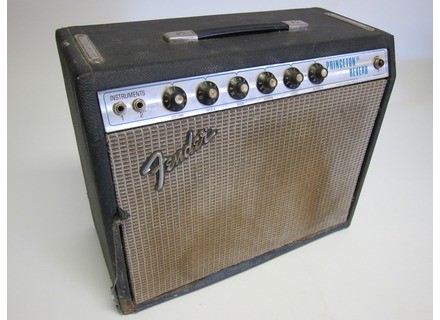 View other reviews for this product:
The Fender Princeton Reverb Silver Face version is a small guitar combo amp that was made in the 1970's (or at least the one that I've used was made then). There's all different versions of the Princeton Reverb, including a reissued version, but this is for the original Silver Face one. The amp has 12 watts of power and a single 10 inch speaker inside of it. The amp is indeed a tube amp and just has two 1/4" inputs in the front of it.

Using the Fender Princeton Reverb is as simple as it gets for a guitar amp. If you know even the slightest bit about amps or guitars in general, you should be able to use this amp without any problems. The parameters that the amp has include volume, treble and bass tone knobs, reverb, and speed and intensity for controlling the vibrato effect. If you have used a Fender amp before, you'll certainly recognize this make up. Everything should be self explanatory, so a manual isn't necessary.

The sound of the Fender Princeton Reverb is outstanding for such a small amplifier. I recently was working on a session where the guitar player brought this little amp in. We have a lot of amps to choose from at the studio I work at, including some smaller ones, but this would take the cake compared to any of the smaller combo amps we've got, which is saying something because we have some pretty good ones. The Princeton Reverb has a super clean sound where it's possible to get a bit of volume without over-driving it, which can be done, but for the most part it's very clean. For what we were going for, this was absolutely perfect...

There are ton of different vintage, small combo amps that Fender has made over the years, but the Princeton Reverb has to be one of my favorites. It's really the perfect amp for recording if you're looking to get a crystal clean guitar tone. I'd probably recommend a bigger Fender amp like a Twin Reverb if you're looking for some overloading tubes, but I'd go with this one to get that clean guitar sound. Don't know what kind of price this would command, but probably not too cheap since it's an older amp. Either way, if you're a serious guitar player looking for a great small tube amp to record or practice with, the Princeton Reverb is hard to beat.
Did you find this review helpful?yesno