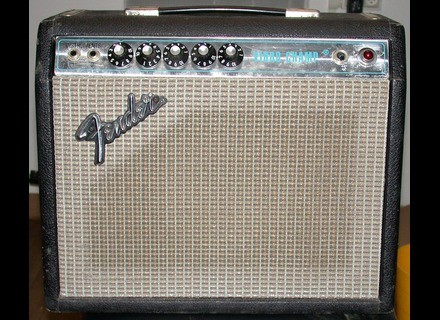 View other reviews for this product:
The Fender Vibro Champ '70 is a vintage guitar combo amplifier that I've used in the recording studio. This amp can certainly be used in any situation that you'd like to use it in, but since I've only used this amp in the studio, this review will be focusing on that use of the amp. I should say that I'm not 100% sure on the year of the one that I've used, but I'm pretty sure it was right around 1970, or at least it's from the early 1970's. We've got one at the studio where I work. The amp has two 1/4" inputs in the front and I'm not sure if it has any other connections on the back panel since I never had a need to look. The amp delivers 6 watts of power and has a single 8" speaker.

The configuration of the Fender Vibro Champ '70 is very simple. It only has a few parameters to work with, but it really has all that you need. The parameters it has are for volume, treble, and bass, as well as parameters to control the vibrato effect, which are for intensity and speed. If you've ever used a Fender amplifier with vibrato before, you know that these are the parameters found for this. It's so easy to use that a manual won't be necessary.

For such a small amp with only an eight inch speaker and six watts of power, the Fender Vibro Champ '70 really has a huge tone. I've used the amp with a Fender Telecaster primarily for a recording session where we were looking for a vibrato effect and wanted to overdub the part. We could have used a pedal, but since this was around we used it and I'm glad that we decided to. The vibrato is pretty much just like any found on other Fender amplifiers, so needless to say it sounds awesome. The amp in general is great sounding for getting a simple clean tone or adding some vibrato, but don't expect too much in the form of overdriven tubes since the amp has such a small wattage.

Overall, the 1970 Fender Vibro Champ is a really awesome guitar amplifier considering it's size and power limitations. The vintage Fender Vibro Champs are better than the newer ones in my opinion, even though there isn't as much to work with here as the newer models. I can't say much about the price or the availability of this since I don't know much about it, but if you need a mini amp for practice or recording and want to get something vintage, the '70 Vibro Champ is a really awesome little amp!
Did you find this review helpful?yesno
Cookies help us improve performance, enhance user experience and deliver our services. By using our services, you agree to our use of cookies. Find out more.