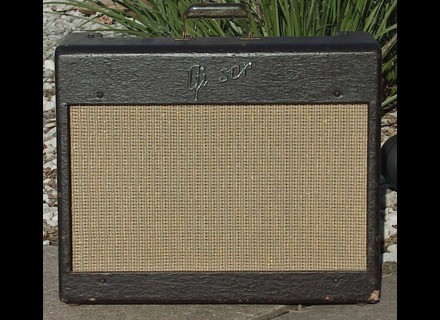 The Gibson GA-6 is a guitar combo amplifier from the mid 1950's. This is an all tube amp, featuring what I believe are 12AX7 tubes. The amp has a single 12" speaker and a total of four 1/4" inputs - three labeled instrument and one labeled microphone, the difference only being the amount of input gain. I'm not sure the wattage on this amp...

The make up of the Gibson GA-6 is very simple to understand. As far as controls are concerned, it only has knobs for instrument and microphone level, and a single tone knob to control extra bass or treble either way. That's all there is to the amp, so no need for a manual.

The Gibson GA-6 has an awesome overall sound, especially for recording in the studio. It's got it's own sound for sure, but definitely fits in the classic tube amp category well judging from the sound alone. There isn't too much room for tone control, but that never bothered me as it usually sounds great right from the start. I don't know that I'd prefer this to something like a Fender Deluxe, but it's definitely a great color to have as an option.

The Gibson GA-6 is a great overall combo amp, but is pretty rare. I've been lucky to have used it on a number of occasions as a producer I often work as an engineer for has one of these at his home studio. It's not going to give you the cleanest sound, but for a little bit of tube distortion, this thing rocks. Since it's such an old amp, no doubt many of them have been lost along the way, and the one that I've seen is not in great shape. However, the Gibson GA-6 is absolutely worth a second look if you ever come across one in the studio or for sale.
Did you find this review helpful?yesno
Cookies help us improve performance, enhance user experience and deliver our services. By using our services, you agree to our use of cookies. Find out more.