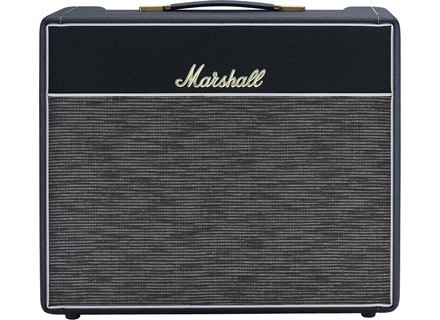 Buy this productView price information >
View other reviews for this product:
The Marshall 1974X HW is (as indicated by the "HW") a hand-wired 1 x 12 combo amp in the style of the famous Bluesbreaker amp. The amp is rated at 18 watts and has a tube compliment of 2 EL84 tubes in the power amp, 3 ECC83s in the preamp, an EZ81 rectifier tube, and uses part of the tube regiment for the valve-driven tremolo. The control layout is extremely simple. The basic controls for both channels are Volume and Tone with the difference being that the Tremolo channel has two controls for Speed and Intensity. There are two inputs per channel with the normal channel having two identical inputs, whereas on the tremolo channel the bottom input is -6db and is voiced slightly darker than the upper input. Finally, the combo has a specially-voiced 20 Watt, ceramic magnet, 15 Ohm, Greenback speaker that just oozes vintage vibe. There is a connection for an extension cabinet and an impedance selector switch to keep everything in harmony. Although I've never used it, there is a foot switch for the tremolo to turn it on or off. And, in true vintage Marshall style, the two channels can be "jumped" to provide additional tonal variations.

I got this amp on a lark--someone bought it and didn't like it (????) so I got it at a smashing used price. I love this amp. Like the old Plexis you can jump the channels and get a little boosted sound (and the tremolo option). Footswitch and amp cover are included. The normal channel is super-simple: Volume control and one Tone knob. The amp doesn't really get any louder beyond about 3, but just breaks up more. I run the tone control around 1:30 and the Volume all the way up.

Holy lord. Honestly, if I had to go out and do a simple club gig and was being rated on tone, this is the amp I'd take. The tone that comes out of the "aged" 1 x 12 greenback makes you want to weep. Even with the volume dimed and ripping overdrive I can roll back my guitar controls and it cleans up nicely. Probably the best natural overdrive I've ever heard. Sounds good with ANY guitar, even my Squier and low-end Ibanez guitars, but plug in a nice Les Paul or American strat and you'll just lose hours in the creamy, buttery tone. Interestingly enough, I recently had the opportunity to play a BluesBreaker combo (the 30-Watt 2 x 12 version of this amp) and found it to have too much bass and not-as-sweet overdrive. Takes any pedal well, but no effects loop so if you want the amp's overdrive you're probably not going to be able to use time-based or modulation effects well (unless you're doing cleans-only). I don't know that this amp will get into death-metal territory without a pedal in front, but it sounds so good I don't know that you'd want to.

This amp is really purpose-built. This amp does what it's intended to do EXTREMELY well. It is outstandingly clean and when cranked up delivers the sound of Rock 'n Roll that is ingrained in all of our heads. I was skeptical about the price-to-value ratio but when playing the amp all concerns fade away. As noted above, I tried the 2 x 12 version and didn't like it as much. Having had MANY Marshall amps in the past, and now having this Hand-wired model I don't know if it's just a mental perception thing, but the difference is there in the tone. It's something you really have to experience for yourself, and I encourage everyone who is a fan of Rock 'n Roll to play this amp at least once.
Did you find this review helpful?yesno
Cookies help us improve performance, enhance user experience and deliver our services. By using our services, you agree to our use of cookies. Find out more.