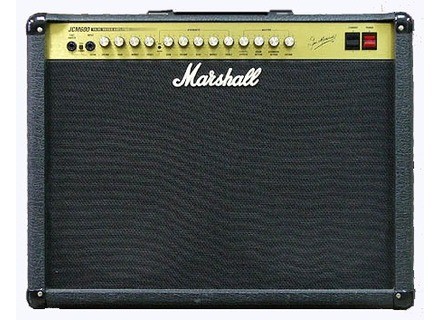 Value For Money : Excellent Audience: Anyone
It's a tube amplifier with two EL34 power tubes and four 12AX7 for the preamp section.
Power is 60W, can rock really hard when pushed. 2 Celestion Heritage speakers which work very well with it, great sound dispersion, I'd even say the sound is better when NOT facing the amp.
Two totally independant channels with separate volume, bass, mid, treble and reverb settings for each plus a gain control for channel 2. There's also a global master volume and a front knob for the parallel effect loop (there's also a second, series fx loop).
The weight seems quite acceptable, it's a 2x12 combo but it remains transportable, I used to have a Laney Chrome Ozone that seemed heavy as hell compared to it, yet it only was a 2x10.

Very easy to use, you just plug it in and instantly get a great, vintage, very hot and punchy sound. Changing channel is done through the front panel switch or a classic footswitch (on a side note, plugging the footswitch de-activates the front panel switch). However, the reverb is not footswitch-controllable.
As a little extra, there's also an XLR line out as well as a presence knob, both located at the back of the amp (which seems strange, but not really annoying).

Clean sound is very dynamic, you have to be precise when playing with a pick. In all circumstances, it reveals of all the guitar's sound nuances. The resulting sound really matches that of the guitar very well, through it a Strat really won't sound like a Gibson. The tubes are really here to be heard. It starts crunching slightly yet in an interesting manner from volume set at three-quarters on this channel, thank the master volume to help regulate the overall volume output.
The Overdrive channel goes from a slighly bluesy crunch all the way to a heavy distortion. The crunch sound is beautiful, really nice for playing blues.

Both channels deliver an exceptional dynamics, be careful when playing with a pick, I really was impressed by how sensitive to attack it was. Really punchy.

It's a very good Marshall, it's strange how little known it is. Its power allows it to be used in all sorts of situations, either in rehearsal or on stage. As a former JCM900 combo owner, I can say there is no comparison between the two as far as sound quality is concerned. It seems reliable.
I'd say it sounds like a JCM800 but in a modernized version, regarding its connectors, two effect loops and master volume.