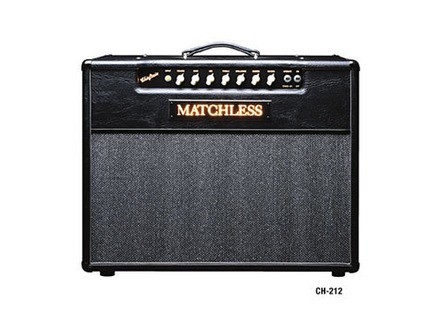 « Versatile combo for any guitarist »
5

View other reviews for this product:
I've actually owned a few of these over the years. It seems to be an amp I end up missing and buying again. All were good. I think I've had 4 in total and they were roughly the same. One had a slightly different control layout and was a bit different than the others in tone, but the other 3 sounded more or less the same. I currently own 2 because I like them so much. Matchless describes this as their high volume stage amp. I would say that's...sort of correct. In my opinion this is the EL34 take on the DC30 in some ways. Imagine if a low gain plexi and an AC30 had a baby...this would probably be the offspring.

The control layout isn't too complicated. It's surely not hard to get a good sound. It's loud as sin and this is a gigging amp in every sense of the word. To be honest it doesn't sound too good until at least half way up. Well it sounds okay, but not phenomenal. Not a studio amp unless you like it LOUD in the booth. It's almost even too much for a small club.

I use a variety of guitars into it. My pedalboard is always changing. I really like using a TIMMY with it though. I find it likes humbuckers more than anything. This is a relatively clean amp until you get it to about 2 oclock. It stays on the edge of breakup and then when it really gets cranked it starts to give the dirt. I like to keep in a bit past noon and use pedals to get my gain. The sound is very upper register. The chief never gets muddy. If you play it by yourself it can sound freaking piercing to the ears. In a band mix it's fine. Other than that the Chief has a super flat response. It's definitely not Fender. But it doesn't sparkle like a Vox and it doesn't grunt or roar like a marshall either. It's really a unique voice. To me it sounds like a plexi with the aggressiveness taken out. The eq is closer to a Vox though. It has a lot of upper mids.

You can use the Chieftain for anything. It has a voicing that will sit in any style. I can't explain it really. It's hard to dial in a bad sound. I can play a blues gig with this and turn around and do indie rock, the do a weekend Jazz gig. It just works everywhere that doesn't require a high gain amp. I've never had one of these crap out on me and believe me I have tested their builds. They get gigged a lot. I think Matchless really did something unique and special with the Chieftain. The speaker choice is great too. I love these amps. So versatile and epic sounding.
Did you find this review helpful?yesno
Cookies help us improve performance, enhance user experience and deliver our services. By using our services, you agree to our use of cookies. Find out more.