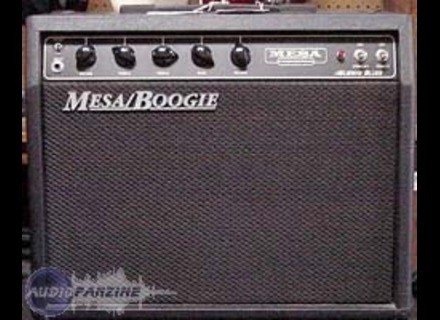 View other reviews for this product:
I got two, one in 95 and another ten years later.
Although manufactured easiest I've ever seen in mesa.
HP 10 inches a little soft, a ElectroVoice suited her much better than the original.

Very simple, effective, intressant options but in vain, the machine is plague by background noise.

The concept is excellent.

It's cool to use, and the loop or PARALLEL series allows all Facts. Except that noisegate can do absolutely nothing against the background noise standard that my two copies taient achieved.
Anyway, great to use.

Sound dlivr is quite exceptional, especially for an amp that small. It's very very hot and full, without breaking the ears, there is a fantastic mellow notes. I used to clean, since later it's still the same thing with the single channel amplifiers (ie bovine flatulence) ... well the ones I had or tests.

What is the relative cool cat cub2r REFERENCES bad is that the volume is much smaller so we will appreciate better the sound, then when you play not as a group.
Therefore presents 18watts but not garish, it's a great Russianness dynawatt. When you think that the current recovery is not LED lamps, but is very strong from mesa.

The rverbe along MODEL passes just in the combo indeed, and sounds very very good.
So I think it's perfect level.

In short this would be my dream amp, with clean rverbe, hot sweet not too strong, so this problem n'tait background noise. I really want mesa, because a lot of lives would have cost and dconvenues by buying other amps, and it is unfortunately not finished.

The two I had made so much noise (after half an hour had covered everything) ... Nothing did, change all the lights, put a less effective hp A noisegate in the loop, change the filter capacitors, nada.
Forums us somebody said that these amps are simply wrong conus and can not be otherwise if the problem arises, what I had to admit.
I even think I had a bad horse, or my repeat offenders.

Council any buyer, let it run the amp at least three quarters of an hour, because when you do not use it for months the noise disappears. on the other hand ds he returned more way to play, just the APRS PERIOD non-use is 45 minutes before the noise, then 40 and 35, for after a week of use Daily no longer make that noise.

Bizarre, bizarre ... I want mesa, because I was under my ideal amp. To avoid absolutely
See the source
Did you find this review helpful?yesno
Cookies help us improve performance, enhance user experience and deliver our services. By using our services, you agree to our use of cookies. Find out more.