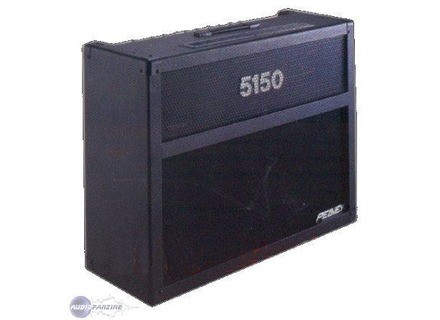 The one big thing to mention is the lack of a clean channel. The rhythm channel can be cleaned up, but isn’t really intended for that purpose. The additional lack of individual channel EQs compounds that difficulty. Otherwise it is a breeze – the inclusion of pre and post controls for each channel, bright and crunch switches, as well as post preamp presence and resonance controls make for an amp that can be dialed in very precisely.
Do note that it is incredibly heavy – I never got casters for mine, and my back paid for it. The 5150 is one of the more reliable amps that I’ve used, never had any kind of issue with it. Doesn’t need to be cranked to sound decent which is pretty convenient. Has plenty of volume on tap for when you want to crank it.

Most people seem to take issue with the cleans on the 5150. No, they aren’t twin reverb cleans, but definitely not as bad as a lot of people make them out to be. With a little tweaking, some reverb, and a slight amount of chorus in the effects loop, you can come up with something that sounds pretty good.
The rhythm channel can be pushed a little for a gritty early rock type sound, but that isn’t really the amps forte. The lead channel just sears, and has more gain than you could possibly use. A little fuzzy at times, and possibly not the most articulate, but a very raw and cutting sound. Pulls off most genres of rock and metal beautifully.

An indestructible amp with tons of gain on tap. These can be picked up for between 4-600 on the used market , which is an absolute steal for what it is. The 5150 is identical to the newer 6505 combo which is currently in production. I like the sound of the combo better than the 5150/6505 head, it is supposed to come with a better factory cathode bias. The stock Sheffield speakers aren’t the best and can use a swap. These haven’t been made in a while under the 5150 name, so if you find one chances are it’ll need a retubing – don’t forget to add that into the price negotiation.
Did you find this review helpful?yesno
Cookies help us improve performance, enhance user experience and deliver our services. By using our services, you agree to our use of cookies. Find out more.