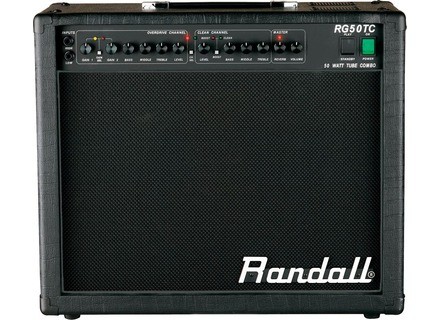 View other reviews for this product:
Fifty watt 1x12 combo with EL34 power tubes. Comes with a Celestion speaker. Two channels, one clean and one dirty, but each channel has two modes. Clean has a boost switch and the gain channel has a 'vintage' gain and 'modern' gain switch. Has jacks for extension speakers and fx loop.
I've been playing guitar for approximately 26 years and I've owned tube amps like a Marshall JCM 800, Peavey 5150 and a Mesa/Boogie Subway Rocket. I've also owned solid-state amps like Marshall Valvestates, a Peavey XXL and an old Randall RG100 head back in the '80s. My choice of music is classic metal like Iron Maiden, Black Sabbath, Rush, Judas Priest, Accept, Dio, Savatage, old Slayer, old Metallica, old Megadeth etc.

I bought this on clearance for $480 from Hollowood Music in McKees Rocks. I wanted something small and portable yet still had a pretty killer distortion. I tried a few other amps like Line 6 which was too digital sounding, a Peavey JSX combo which is an awesome amp but unfortunately out of my price range.

The first thing you'll notice about this amp's tone is that it's not the solid-state Dimebag sound that is so often associated with Randall. It's also not very 'modern' sounding like a Mesa or Engl or even some newer Marshalls that have a compressed, scooped-mid sound.
With four 12ax7 tubes in the preamp and 2 el34 powertubes, this thing pretty much screams Marshall JCM800. I used a Les Paul guitar with EMG 81 pickups so the active electronics of the guitar pushed the amp into an aggressive metal overdrive, but if you're using passive pickups, you'll need a distortion pedal to get into the metal zone.
I used this through a Randall 4x12 cab with Jaguar speakers and it pretty much nailed Randy Rhoads' Blizzard of Ozz tone all the way to Metallica's 'Kill em All.'
The clean channel by itself is useable, although you're not going to get classic Fender. The boost function on the clean channel adds some dirt and does a great bluesy, Marshall Plexi-type sound. I ran a chorus pedal with the clean boost and it copped a Robin Trower 'Bridge of Sighs' tone pretty impressively.

This amp is a 'one trick pony', with that one pony being a Marshall clone. If you're looking for a multi-channel amp that goes from Fender sparkle to bluesy Marshall overdrive to modern Mesa mayhem, this isn't it. Scooping the mids in an attempt to get an aggressive thrash metal sound results in a tone that is thin and buzzy.
Also, for 50 watts, this amp is not very powerful. The lack of headroom is frustrating wih the clean channel. Playing with a totally clean sound is almost impossible, especially at band/gig volumes as the amp wants to distort. Of course, it could have been my active pickups driving it harder.

This amp was made in China, so corners have been cut to keep the price reasonable. The knobs aren't very sturdy feeling and the tubes are protected by only a plastic grill. However, I used this amp on a regular basis for over a year -home use and jam sessions at people's houses-and never had any problems with it.

Back in the 90s, nobody wanted a Marshall JCM 800-everybody wanted Mesa Rectifiers. I paid $500 for a used, excellent condition 50 watt JCM 800 head back in the late 90s and I wish I never parted with it. Now that Kerry King and Zack Wylde have made JCM800s popular again, the price of these amps has escalated. The Randall RG50TC would be a good choice for a beginner or mid-level amateur who wants the vintage Marshall tone without paying the price of a real Marshall. It's lack of power and tone options keeps it from being a serious gig amp, but it could do the job for small jam sessions. Unless I came across one for a very low price, I wouldn't buy it again.