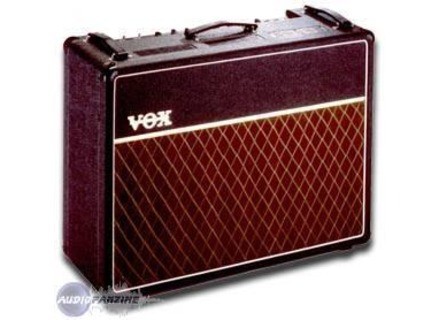 -It would be nice if there was a way to change the channel settings through a stomp box, but on my model, there was only a reverb and tremolo effect switch pedal, which I never use.

The AC30 is slightly difficult, initially, if you are trying to do, as I do, and take advantage of the awesome low end tone and the clarity of the amp but still having an effects rig, with distortion and or overdrive. This amp isn't made for metal, but its definitely worth the learning curve, once you pull out your first growling lead line or erupt into a shred-fest.

Tip: The crunch already in the amp is well worth toying with, and you should probably set the amp tubes to &quot;Hot&quot; on the rear of the head portion for gigging, even though this will shorten your tube life, I think the sound is well worth it.
As for the manual they give you, it will do wonders for you if you want to use your AC30 more for what it was designed for, ie Classic Rock style music; however, it may take some time tweaking your AC30 and the effects rig to make it sound like a snarling beast.

After all is said and done, my amp sounds like a better balanced version of a B-52, with a really warm bass tone that drives my dropped C tuned guitar lines growling straight through the mix without ever sounding cheap, hollow or tinny.

Currently, I'm running with the Ibanez Tube Screamer Pedal and the Boss Compression Sustain Pedal, as well as a Digitech multi-fx pedal.

I have an ESP MH400 with a Licensed Floyd Rose, a really amazing Aria Pro Les Paul Copy (which plays smoother than butter), and an American Strat (Diamond Anniversary model ^.^)

When I'm playing around with blues and country/classic rock sounds, this amp is perfect. Once I got my whole pedal scheme situated, then this became an amp that was well above even the type of amp that is usually used for the type of music that I play.

I've been playing Guitar for a good few years now, and as a few of my closest friends seem to love to remind me, I'm the guy most other guitarists hate. Fact is, I had the time to practice 10 hours a day, productively. I started only four years ago, and am at a point where there are few things that I can't play if I have the music and two hours to rehearse.

Enough about my playing ability.

As for my Equipment experience, my first few amps were much more stereotypical of the metal-esque genre of music that I typically write. There's My Peavey Studio 112, my Peavey 5150 Blockletter and then...there is my Vox AC30.

The AC30 is marketed strongly to guitarists looking for a bluesy, classic rock or jazz sound, but I've come to feel it is the quintessential metal amp too. Granted, it doesn't come stock with the type of distortion or gain of some amps, like say the 5150, and this causes the necessity for a pedal rig, but the overall tone of the amp is so rich that it even makes my cheap digitech multi-effect pedal sound amazing, warm and alive. Please understand that, prior to this amp, I only used that pedal to practice silently because it always just sounded too digitized and cold to me, now it is part of my gig-rig, and I use the wa and delay on it pretty often.
Did you find this review helpful?yesno
Cookies help us improve performance, enhance user experience and deliver our services. By using our services, you agree to our use of cookies. Find out more.